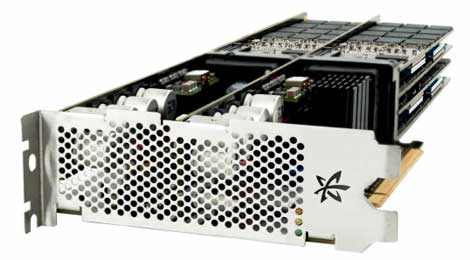 The 10 TB ioDrive Octal, which delivers up to 20 Terabytes of flash-based acceleration in a 1U server.

Additionally, it was announced that the Lawrence Livermore National Library recently broke its previously held record of a single node server containing 12 TB of ioMemory technology.

10 Terabytes on one PCIe device

The 10TB Octal achieves the capacity and density through the integration of eight 1.28 TB MLC (multi-level cell) ioMemory modules in a single double-wide PCIe device. A little over a year ago, Fusion-io was ahead of the industry by delivering a 1.28 TB on a single PCIe card.

The new Octal delivers more than 1.3 million IOPS with 6.7 GB/s bandwidth, up to 20 TB in a 1U server, optimized performance for read-heavy environments such as data warehousing, scale out architectures, supercomputing, and Octal can reduce power and cooling costs of data-intensive server farms. Powered by Fusion’s VSL software platform, the ioDrive Octal allows even very large data sets to be accelerated within the server for extremely low latency performance.

"The 10 TB ioDrive Octal packs increased raw flash capacity in a server, enabling customers to accelerate even very large data sets with an intelligent and efficient ioMemory solution," said David Flynn, Fusion-io Chairman and CEO. "Previously, a 4U server could contain 10 ioDrive Duos for 20 TB of total capacity, but now up to four 10 TB ioDrive Octals can be integrated into a 4U server, such as the HP ProLiant DL585 G7, delivering 40 TB of total capacity."

While most submissions to Graph500 count on expensive supercomputers the Fusion-io ioDrives enabled an alternative way by giving low-latency access to graph nodes and edges, thus using a single computer to process a graph with 68,719,000,000 nodes.  The Hyperion Data Intensive Testbed is a LLNL and Fusion-io collaboration to explore data-intensive computing systems that leverage low latency flash memory.  The single node Leviathan system achieved 52.796 million traversed edges per second (TEPS), the Graph500 speed metric, while the Hyperion DIT attained more than an order of magnitude higher TEPS.

"Given the energy and costs associated with building out and running a supercomputer, LLNL’s benchmarks point to vast savings while achieving the top tier performance required by leading HPC research. LLNL was one of the first to adopt Fusion-io technology, and we congratulate their visionary team for beating their previous results with Fusion ioMemory and their powerful algorithm on a single node,” said Neil Carson, Fusion-io Chief Technology Officer.