AOL runs about 60,000 servers, Manos said, which are spread across five primary data centers in North America and Europe. "We're talking about dramatically reforming what was one of the world's largest Internet companies," said Manos 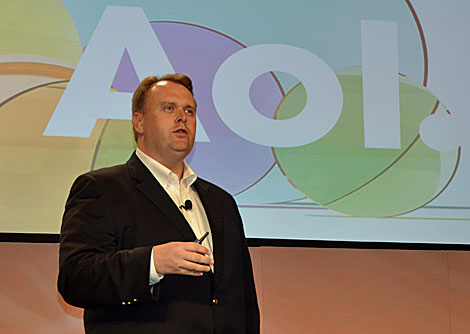 In his presentation at the 7x24 Exchange Fall Conference Monday in Phoenix, AOL executive Michael Manos' topic was "Managing Disruption: A Data Center Love Story." Manos invoked iconic cinematic romances, including Romeo & Juliet, Gone With the Wind and even The Princess Bride.

Perhaps a better movie comparison for AOL's ambitions might have been Back to the Future. AOL has played an important role in Internet history, serving as the initial on-ramp to cyberspace for millions of users. But can AOL re-assert its relevance after years of struggling to keep pace in a fast-changing environment?

It won't be easy. As America Online, the company was a pioneer in rapidly scaling its infrastructure capacity to meet public appetite for Internet information. But AOL's recent growth has mostly been through acquisitions, and the company has been late to broader trends like Web 2.0 and social media, while some of its older brands dwindled.

But most folks haven't thought of CompuServe in years, or perhaps decades. How can AOL's data center infrastructure - in which CompuServe co-exists with newer AOL properties like Engadget and Patch - make a difference?

AOL runs about 60,000 servers, Manos said, which are spread across five primary data centers in North America and Europe. "We're talking about dramatically reforming what was one of the world's largest Internet companies," said Manos. "In our case, the data center team was very plugged in and wanted to improve. What we did was come in and radically reduce the cruft."

A starting point was "Project Ops-Surdity," a mission to find and retire servers that were plugged in but not performing any useful functions. "In 10 months, we've been able to reduce our footprint by 4,500 servers," said Manos. "It's been a lot of work."

Next came a hard look at operations and staffing, which resulted in sharp cutbacks in data center staffing and the introduction of an unmanned data center. "Does that mean I'm a ruthless SOB who just likes to blow things up?" said Manos. "We realized that a lot of things we were doing were no longer valid."

AOL has begun operations at a new data center in which all monitoring and management being handled remotely. The new “lights out” facility is part of a broader updating of AOL’s infrastructure that leverages virtualization and modular design to rapidly deploy and manage server capacity.

Manos, who previously held posts at Microsoft, Digital Realty Trust and Nokia, said the effort is coming amid growing awareness of the importance of infrastructure and operations, which was reflected by record attendance of 780 industry professionals at the 7x24 Exchange event at the Arizona Biltmore.

"Everyone has suddenly become an expert in data centers," said Manos. "Four or five years ago we were a pretty small community. The amount of attention we are getting is really impacting how we do business. The data center has gone mainstream. Like it or not, the data center has become the sexy thing to talk about."