Bob Deutsche of Intel explains how cloud technology—and, by default, any of our business systems and related data hosted in the cloud—must contend with policies and standards that are framed by location and related geopolitical considerations.

Bob Deutsche joined Intel in 2004 and has more than 25 years of business and IT experience in positions that ranged from data center operations to software development to CIO. He can be found online at Bob Deutsche on the Intel Server Room.

For me, one of the many challenges in writing a biweekly column for a respected online journal like Data Center Knowledge is a secret fear that nobody will read or care about what I’m saying. I was prepared to admit to some feelings of inadequacy until last weekend—when I celebrated the end of Oktoberfest ("zicke, zacke, zicke, zacke, hoi, hoi, hoi") and finished the third book of Edmund Morris’ trilogy on Teddy Roosevelt, Colonel Roosevelt. In the book, a reporter for the New York Times says the muted reaction to many of Roosevelt’s speeches denoted not so much apathy as “a quiet, steady, intent earnestness that does not often characterize a crowd. . .” Hey, that’s good enough for me.

With this thought in mind, I begin a two-part installment on my sixth Fundamental Truth of corporate cloud strategy: Technology-driven business practices often circumvent government regulations, but legal and government policy standards will dictate the cloud’s success.

You may ask why this truth, unlike the others we’ve discussed, requires two installments (and, of course, the time it takes to read them). The answer is simple. Based on everything I see and hear about worldwide cloud implementation, this topic is the most important of my eight truths. It deserves more explanation than is possible, at least within my humble abilities in the 1,000 or so words we have here.

To begin the discussion, look at this image: (Click Image to View Full Size) 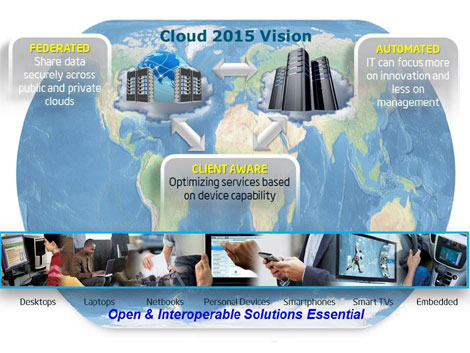 While our 2015 cloud vision is an interesting discussion on its own, the implications and limitations of the broader cloud vision, as related to policy, become apparent if you consider the world map I’ve included in the background.

Let me explain: A robust cloud framework (private or public) is community-oriented by its nature. This includes not just select parts of the community, but the entire ecosystem—hardware, data, process, communications, and skills. By considering that the cloud community, at least from a technology perspective, has the potential to include every country on the planet, you begin to get a sense of why I consider the discussion of cloud policy so important.

From this point on, we must consider how cloud technology—and, by default, any of our business systems and related data hosted in the cloud—must contend with policies and standards that are framed by location and related geopolitical considerations.

In an October 1 Washington Post column by Lillian Cunningham, Google’s Eric Schmidt recalls a dinner in 1995 with Intel’s co-founder Andy Grove. When asked about governments’ ability to react to technological change, Andy said that “. . .high tech runs three times faster than normal businesses. And government runs three times slower than normal businesses. So, we have a nine-times gap.” Although the comment was primarily about government in the U.S., governments worldwide have a similar cadence. Given government’s role in establishing and implementing cloud policy and standards, this is an interesting conclusion.

In my opinion, some of the most open thinking about the global implications of policy and standards on the cloud is coming out of academia. Maybe this is because the academic community, by its nature, is a group of experts aligned along areas of interest versus geography.

In November 2010, Keio University, Japan’s first private institution of higher learning, published the Asia Cloud Manifesto. The document explores the implications of cloud computing across Asia and begins to address potential impediments to the regional cooperation it will take to establish a robust cloud ecosystem. A key element of the discussion is identifying policy- and standards-related issues that apply to the cloud in Asia. For me, the most compelling aspect of the Manifesto is that these issues are universal.

Based partially on the Manifesto, and in no particular order, here are what I consider the top-tier policy and standards considerations for the cloud:

In Part 2 of this column (in about two-weeks), we’ll discuss each of these considerations and identify some of the major global government cloud policy initiatives you should at least be aware of (expecting that your cloud service provider is an expert in all of them) as you continue your journey to the cloud.

Finally, and to help keep things in context, here’s a complete list of the inviolable, Fundamental Truths of corporate cloud strategy:

In future discussions, I’ll continue to detail these fundamental truths. As always, I’m interested in what you see or hear about today’s topic or others that we’ve discussed. Please join in the discussion by posting a comment or contacting me via LinkedIn.