Fusion-io (FIO) this week introduced the next generation of its ioDrive enterprise Flash technology, which it said will outperform the original ioDrive on all measures. 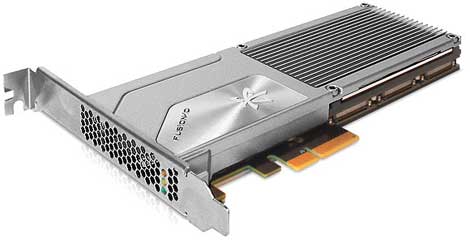 The new ioDrive-2 from Fusion-io.

Fusion-io (FIO) this week introduced the next generation of its ioDrive enterprise Flash technology.The company said its new ioDrive2 and ioDrive2 Duo will outperform the original ioDrive on all measures and deliver powerful latency performance, improved endurance and reliability.

'Building Block for the Next Generation'

"A new approach is necessary to address the growing problem of datacenter inefficiencies," said Benjamin S. Woo, Program Vice President, Storage & Big Data, IDC. "The I/O subsystem in use today was developed over 30 years ago and is no longer sufficient to serve the demands of today's growing business. Fusion’s ioMemory is a building block for next-generation datacenters that provides applications fully scalable memory for accelerating throughput and drives higher-performance density and efficiency in application server platforms."

"We developed the ioDrive2 to outperform the original ioDrive on all measures," said Fusion-io CEO and Chairman David Flynn.  “Customers have grown to expect nothing but groundbreaking products from Fusion-io. Today, we are proud to raise the bar once more with the ioDrive2."

Fusion-io also announced a new extension to its VSL (Virtual Storage Layer) software subsystem for conducting Atomic Writes in the popular MySQL open source database. Atomic Writes are an operation in which a processor can simultaneously write multiple independent storage sectors as a single storage transaction. This accelerates mySQL and gives new features powered by the flexibility of sophisticated flash architectures. With the new Atomic Writes extension, Fusion-io testing has observed 35 percent more transactions per second and a 2.5x improvement in performance predictability compared to conducting the same MySQL tests without the Atomic Writes feature.

"With a software-centric approach, intelligent memory architectures can leverage the potential of flash to develop new features that accelerate databases and applications in ways previously not possible," said Nisha Talagala, Fusion-io Lead Architect. "By reducing the number of steps required to safely write data, the Atomic Writes software extension enables a substantial improvement in predictable performance and reduces the impact of database processing on the host CPU."

The Atomic Writes extension will be available to select customers for testing in the fourth quarter of 2011.