Google used about 2.26 million megawatt hours of electricity to run its operations in 2010, generating a carbon footprint of 1.46 million metric tons of carbon dioxide, the company said today in its most thorough disclosure yet of its impact on the power grid and the environment. 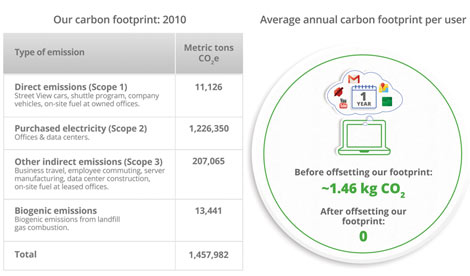 Google used about 2.26 million megawatt hours of electricity to run its operations in 2010, generating a carbon footprint of 1.46 million metric tons of carbon dioxide, the company said today in its most thorough disclosure yet of its impact on the power grid and the environment. Google also outlined the steps it takes to remain carbon neutral, including investments in renewable energy and a comprehensive series of carbon offsets.

Google's disclosure also reflects a larger challenge - how to translate its huge energy use into terms that reflect the company's efforts to be efficient and sustainable. Towards that end, Google has released a web site that compares the energy used by Google's services to other everyday tasks.

Equivalent to a Light Bulb

"We've worked hard to reduce the amount of energy our services use," said Urs Hoelzle, Senior Vice President of Technical Infrastructure at Google, in a post on the Google blog. "In fact, to provide you with Google products for a month - not just search, but Google+, Gmail, YouTube and everything else we have to offer - our servers use less energy per user than a light left on for three hours. And, because we've been a carbon-neutral company since 2007, even that small amount of energy is offset completely, so the carbon footprint of your life on Google is zero."

Google's energy disclosures represent one of the most visible efforts yet to tell the data center industry's efficiency story. The rise of the Internet economy is rapidly shifting business activity from stores and highways into data centers. As these facilities become a focal point for the economy, they also consume larger amounts of electricity. While Internet delivery makes many industries more efficient, data center operators have often struggled to put their soaring power usage in context.

While the new report discusses carbon offsets and renewable energy, Google's data centers are the key to managing the company's environmental impact. "Without efficiency measures in our data centers, our footprint would have been about twice as big," the company said today on a new web site detailing its energy use.

Energy Efficiency an 'Obsession' for Google

"For the last decade, energy use has been an obsession," said Hoelzle. "We've designed and built some of the most efficient servers and data centers in the world, using half the electricity of a typical data center."

Koomey said that Google may be running its entire global data center network in an energy footprint of roughly 220 megawatts of power capacity, and likely has about 900,000 servers in its network.

Google is not disclosing the hard numbers on its data center energy usage, but includes the total in figures for electricity use in all its facilities, including offices. That figure represents 84 percent of the company's total energy usage. Google also isn't saying what it spends on carbon offsets.

Openness on Infrastructure Energy Use

Nonetheless, today's data represents a step towards the recent calls by Greenpeace for improved disclosure of the energy required to run Internet infrastructure. In April the environmental group called on Google and other large IT companies to disclose more information about the energy uses by their data centers, and place greater weight on renewable energy sources in making decisions about where to build new facilities.

Google says renewable energy sources account for 25 percent of the company's energy use. That's expected to increase to 35 percent in 2012 due to the contributions of recent agreements to purchase power from wind generation facilities in Iowa and Oklahoma, which offset the impact of Google data centers in those states. 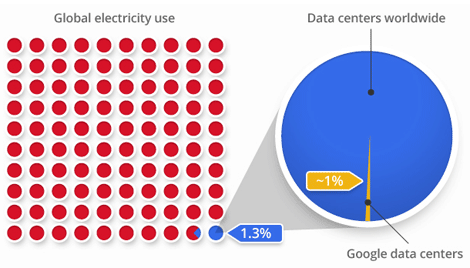