As New York City begins evacuating residents from low-lying area ahead of Hurricane Irene, the region's data center facilities are making preparations to continue operating throughout high winds and possible flooding from a storm surge. Meanwhile, residents are having trouble accessing online info about evacuation zones. 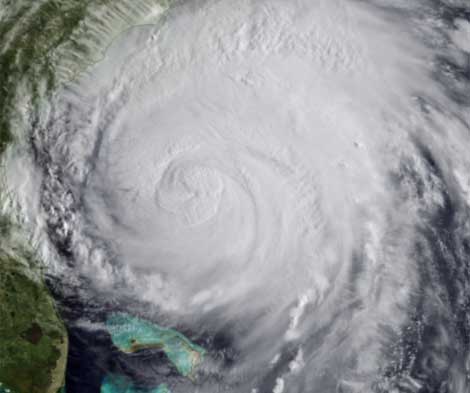 Satellite imagery of Hurricane Irene as it makes its way past Florida and up the Eastern Seaboard.

As New York City begins evacuating residents from low-lying area ahead of Hurricane Irene, the region's data center facilities are making preparations to continue operating throughout the storm.

The hurricane could pose a number of problems for data centers supporting critical services in the New York area, including high winds and heavy rain. The most problematic threat is a storm surge, in which a hurricane pushes a wall of water ahead it, inundating low-lying areas. Sections of New York City and the New Jersey coastline are vulnerable to storm surges, which could cause ground-level flooding.

The exact track of Irene will be key to whether storm surges materialize in lower Manhattan and low-lying areas of Weehawken and Secaucus in New Jersey, all of which are identified as being at risk in storm surge impact maps prepared by local emergency management agencies.

An immediate problem is determining what zone a property resides in. The city web site has an application that allows residents to enter their address and learn what zone they are in and what level of risk they face from a possible storm surge. That app has had intermittent availability problems since Thursday afternoon, and was non-responsive Friday afternoon, shortly after Mayor Michael Bloomberg announced mandatory evacuations for residents in the highest risk area - Zone A - which is currently being evacuated.

Bloomberg said the city had added servers in an effort to keep the site online, but the news conference appears to have prompted a traffic spike. "Due to high web traffic, NYC.GOV websites are experiencing technical issues and may not load in your web browser," the NYC Severe Weather site reported. "The City is currently working to fix the issue." Access appeared to be improving by 3:45 pm. In the meantime, the city was also supplying a PDF with maps of the storm surge zones.

Most of New York's major data center hubs are located outside Zone A. The exception is 75 Broad Street, which houses data centers for Peer 1 and Internap, among others.

Most Manhattan Facilities in Safe Zones

The carrier hotels at 60 Hudson Street, 256 Broadway and 32 Avenue of the Americas are all in Zone B, which would only see a storm surge threat from a "moderate" Category 2 hurricane. The New York Stock Exchange and 111 8th Avenue are both in Zone C, which would only flood in the event of a direct hit frpom a category 3 or 4 storm. While Irene is currently category 2, it is expected top weaken to Category 1 by the time it reaches the New York metropolitan area.

"We intend to be open for trading on Monday," said Eric Ryan, spokesman for NYSE Technologies. " We have contingency plans in place for such events with the goal of having the market up and running while ensuring the safety of our people."

The company's data center in Mahwah, New Jersey was built above flood plains, and engineered to survive high winds.

Several other major financial data centers are in areas of northern New Jersey that local officials say should prepare for hurricane damage. The storm surge maps from the NJ Office of Emergency Management appear to indicate that a Digital Realty Trust building in Weehawken is in an area that could be affected by a storm surge associated with a Category 1 or Category 2 hurricane.

Dave Caron, Senior Vice President of Portfolio Management for Digital Realty, says the state maps are not accurate. Digital Realty did its own survey of the area's elevation prior to acquiring the property and says its elevation places it above the area that would be affected by a storm surge. Caron said the company is prepared to handle water levels that could result from Irene or other major storms. Digital Realty has also upgraded the roof of the Weehawken facility to ensure that the building can withstand hurricane force winds.

Equinix has several data centers in Secaucus, and is also busy making preparations for the hurricane and any challenges it may bring.

“We’ve taken additional precautionary measures to guard against interruption of services at our IBX data centers in areas that may be affected," said Sam Kapoor. "The generators have been double-checked, the fuel levels verified and we’ve put backup fuel vendors on standby in case of any extended power interruption. While all of our data centers are staffed 24x7, we have also made arrangements to ensure staff are available on site as necessary to maintain operations. We’ll be monitoring the situation at each of our sites closely to see if additional measures are required.”