Jon Karlung is known as the visionary behind the "James Bond Villain" data center - the former nuclear bunker beneath Stockholm. Now Karlung is seeking to bring the same sense of futuristic flair to modular data centers.

An illustration of the MDC Stockholm modular data center design.

Jon Karlung is known as the visionary behind the "James Bond Villain" data center - the former nuclear bunker beneath Stockholm that now houses servers for Swedish ISP Bahnhof. The subterranean lair is outfitted with waterfalls, a greenhouse-style NOC, and a glass-enclosed conference room “floating” above the colocation floor. The facility reflects Karlung's belief that data centers shouldn't just be cool - they should LOOK cool, too.

Now Karlung is seeking to bring the same sense of futuristic flair to modular data centers. Karlung is the CEO of Modular Data Centers Stockholm, a new company formed to provide pre-fabricated modules to deploy IT capacity. MDC Stockholm has unveiled its vision for server farms, with a web site depicting modules that look far more stylized than the shipping containers that sparked the modular trend.

"The inspiration comes from science fiction, military facilities and the latest technology for the IT industry," Karlung says of the design, which features three double-stacked 40-foot modules connected to a central inflatable vestibule that connects them.

MDC Stockholm is run by the entrepreneurs behind Bahnhof, including Karlung and colleague Andreas Norman, and partnering with several well known Swedish companies. Design services are provided by SplitVision Design, while the server modules will be built with bullet-proof steel from Sweden's SSAB. The inflatable "command modules" are being created by Lindstrand Technologies, whose founder, Per Lindstrand, is a renowned adventurer who joined Sir Richard Branson and the late Steve Fossett in several attempts to fly a balloon around the world.

Lindstrand Technologies also designed a parachute that deposited the Beagle 2 space probe on the surface of Mars - a project that clearly has stirred Karlung's imagination. "We focus on a future that is inspired by an outpost on Mars: durable, reliable, secure, self-sustaining, power-efficient, scalable - and modular," he writes in outlining MDC's  vision on the company web site. "Join the technological revolution. Let us inspire you to build a city of solid steel, or just a heavy-duty housing module for your precious machines."

MDC Stockholm says its technology and design approaches are grounded in their experience with Bahnhof and its stylish underground bunker beneath Stockholm. Karlung cited his love of old science fiction movies in his approach to the data center. But there's plenty of industrial-strength technology as well, as the Pionen site's client list includes a stint hosting the WikiLeaks web site. In 2009 Karlung provided a video walk-through of the facility with Dean Nelson of Data Center Pulse.

In targeting the modular approach, MDC Stockholm joins a growing number of providers seeking to provide faster and cheaper deployment of IT capacity through the use of factory-build modules that can be installed quickly and expanded as needed based on the customer's needs.

MDC Stockholm will deploy its first modules next month in Kista,  section of Stockholm known for its concentration of IT companies and universities. Kista is the site of Ericsson's world headquarters, and home to more than 1,000 technology firms. A typical installation would include fve modules: a power module, cooling module and three server modules that can each house the equivalent of 35 40U racks.

For more details and a photo gallery, see the MDC Stockholm web site. 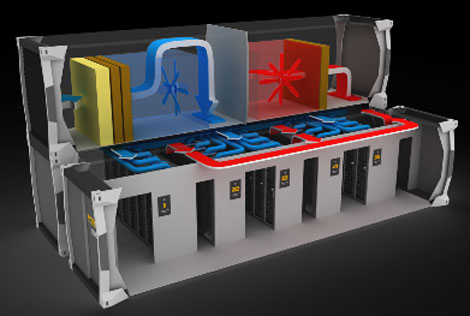 An illustration of the airflow and cooling system for the MDC Stockhold module. The blue arrows indicate cold area, and the red arrows are warm air.