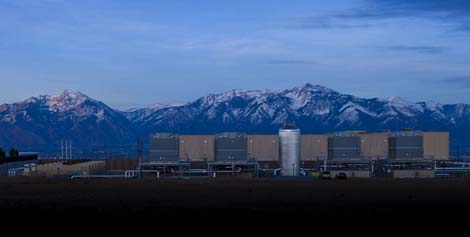 The eBay Prject Topz data center in West Jordan, Utah, in the shadow of the Oquirrh Mountains. The second phase of the campus will be modular, the company said today.

eBay plans to build a new fully modular data center near Salt Lake City, Utah, and is launching an "open RFP" process to invite design submissions. The project was announced today by Dean Nelson, the Senior Director of Global Foundation Services at eBay. The new data center will be the second phase of the company's Project Topaz campus in South Jordan, Utah.

The new facility will be a "greenfield" construction project optimized for modular (containerized) data centers, and will build upon the designs being implemented in eBay's first modular project in Phoenix, Arizona.

For the Phoenix project, eBay selected a design from a team of EDI, AHA Consulting Engineers and Winterstreet Architects, whose proposal was deemed the strongest among 20 entrants in the original open RFP, which was designed to prompt innovation in data center design using modular data centers, which are typically built in a factory and assembled on-site, resulting in a faster and cheaper construction process.

Like the first open RFP, the process will be conducted through Data Center Pulse. The eBay Salt Lake City RFP will be published Friday, Aug. 19 on the group's web site. Here's the announcement from Nelson in a video from Data Center Pulse.