Rackspace Hosting (RAX) is making more and more money from each square foot of data center space with each successive quarter. And now it's beginning to add capacity to further scale up its revenue. 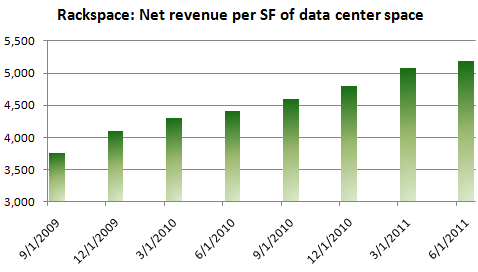 The impressive growth trend for revenue-per-square-foot of data center space at Rackspace Hosting.

Rackspace Hosting is making more money from each square foot of data center space with every successive quarter. And now it's beginning to add capacity to further scale up its revenue.

In its second quarter earnings, Rackspace reported that it is now making $5,195 in net revenue per square foot. The gain continues an upward trend that has seen Rackspace improve its profitability each quarter since mid-2009, when it was making approximately $3,600 per square foot.

The data continues to bear out Rackspace’s belief that cloud computing can be more profitable than the company’s managed hosting business. It all comes down to utilization – how efficiently the provider can use its server hardware and data center space. While managed hosting customers typically use dedicated servers, Rackspace can pack many cloud computing customers onto one physical piece of hardware.

Rackspace (RAX) continues to offer the best window into the economics of cloud computing. Unlike its primary rival, Amazon Web Services, Rackspace provides detailed reporting on its cloud operations.

Rackspace increased its revenue efficiency in the second quarter, even as it added 17,000 square feet of raised floor technical space. The company's data center expansion will gain speed in coming quarters, as shown in Rackspace's spending on capital expenditures (CapEx). Rackspace spent $17.5 million on data center constructon in the second quarter, a bump up from the $6 million to $10 million range seen in each of the previous four quarters.

Rackspace interim CFO Karl Pichler said the increased CapEx was due to the buildout of the final stage of the company's London-area data center, as well as its ongoing consolidation in its San Antonio headquarters. "We expect to complete the London data center buildout, as well as the current phase of our headquarters consolidation project by the end of the year," said Pichler.

CEO Lanham Napier said the expansion is designed to ensure that Rackspace doesn't lose revenue opportunities by running out of data center capacity. Napier said Rackspace needs to be ready for bursts of growth due to growing demand for its cloud computing business.

"As we look at the product launches we've had and the growth that we're experiencing, we are making investments on (data center space) and trying to provide ourselves some operating wiggle room in the event of a growth spike,"said Napier. "We're talking about adding thousands of servers here on a quarterly basis. The last thing we want to do right now while we are experiencing rapid adoption into the cloud is to have capacity constraints at the basic compute level."

Naper said some of that growth will be international. "We believe that this is a global opportunity for our company," he said. "We feel pull from customers to go into new geographies. We will start a product launch in the U.S., get down the experience curve a bit, do some learning and then roll it into new marketplaces."

How big is the upside for cloud computing? Rackspace believes it is huge.

"We believe the cloud computing era represents the biggest market opportunity in all of technology, one that could represent a multi-billion dollar revenue stream for Rackspace," said Napier. "We've only just begun to tap into that opportunity. While the overall size of the market opportunity for Rackspace is difficult to precisely calculate, we know that it is massive and growing rapidly."