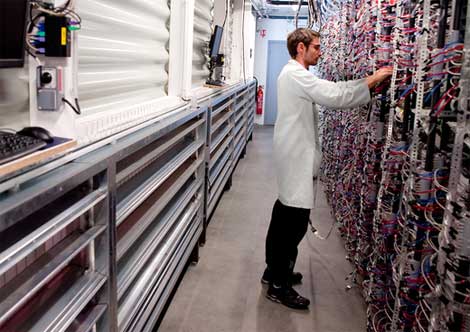 A technician works on some of OVH's thouands of servers in the company's Roubaix, France data center. (Source: OVH)

With HostingCon 2011 wrapped up, it's a good time to assess growth in the hosting industry. So which web hosting company has the most hardware living in its data centers?

The growth also puts OVH atop our listing of Who Has The Most Web Servers? (which includes cloud computing providers, content delivery providers an enterprise companies as well as hosts).

Here's the short list of the largest hosting companies:

Who's missing? The obvious contender is Go Daddy, which manages 49 million domains and is one of the largest players and provides a variety of hosting offering sto its 9 million customers. While Go Daddy discloses metrics on domains and customers, it hasn't disclosed its server counts.

Which companies are on the next tier? Many are in Europe, where Hetzner, PlusServer/Intergenia and LeaseWeb all appear to have between 30,000 and 40,000 servers, based on their most recent public statements. Some large hosts use a much smaller number of servers. DreamHost, for example, hosts hundreds of thousands of web sites but says it has 1,500 servers.

Are we missing any? If you know of a hosting company with 30,000 or more servers, share about it in the comments.