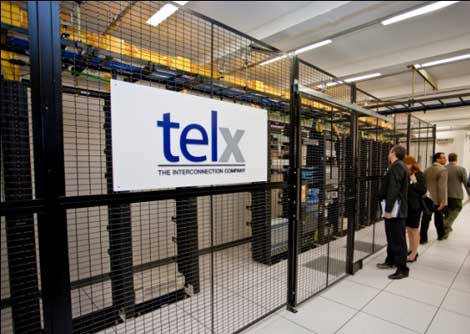 The raised-floor area at the Telx data center in Clifton, NJ.

ABRY Partners has been an active investor in the colocation and manage hosting industries. ABRY currently owns a controlling stake in Toronto-area provider Q9 Networks and holds a significant equity stake in DataPipe. It previously bought and sold CyrusOne and Hosted Solutions.

Telx had filed papers with the SEC last year for an initial public offering in which it hoped to raise up to $100 million in capital to fund its growth. Telx CEO Eric Shepcaro said the company shifted its plans due to interest from potential acquirers. "It really didn't have anything to do with the (financial) market conditions," said Shepcaro. "It was more that there was considerable interest from serious companies."

The deal with ABRY and Berkshire marks a new phase in the growth of Telx, which began life as the network clearinghouse at 60 Hudson Street, one of the premier carrier hotels in Manhattan, where it helped telecom carriers exchange traffic. In 2004 the company acquired 56 Marietta, the leading carrier hotel in Atlanta. In late 2006 Telx was bought by private equity firm GI Partners, which invested in a national expansion of Telx' network and facilties. Under GI's ownership, Telx acquired the NYC Connect meet-me-room operations at 111 Eighth Avenue (New York’s other major carrier hotel) and took over management of the meet-me-rooms at 10 facilities owned by Digital Realty Trust.

Shepcaro said he expects Telx to continue in growth mode under its new owners. "This gives us significant financial capacity to expand the Telx platform," said Shepcaro. "Berkshire and ABRY are committed to work with us on this expansion. "For our customers there will be no changes and they will receive the same excellent service they have come to expect.""

So where might Telx expand? Shepcaro said it will continue its strategy of phased growth in its existing markets, including New York.  The company is adding space in its Clifton, N.J. facility, and says it has additional expansion plans in the area. Telx hasn't offered details, but a likely candidate is a new facility under construction by a commercial developer in Clifton.

Shepcaro also says Telx may enter new markets, citing northern and southern California as markets where there is demand for the company's services. "We need more inventory to support that," he said.

Perhaps the most intriguing growth possibilities are international. Telx has been eyeing European markets for several years, and currently has partnerships with Interxion in Europe and Tata in Asia/Pacific. But the company remains interested in establishing a global footprint. "Right now you have one big global competitor and that's Equinix," said Shepcaro. "We'd like to be a second competitor."

ABRY's ownership role raises the prospect that Telx could partner with other ABRY portfolio companies, including DataPipe for managed services and Q9 for colo and interconnection services in Toronto, a market that is of interest to financial customers. Shepcaro also noted that Telx could benefit from Berkshire's expertise in the wireless tower market, a focus for several of its portfolio investments.

"Eric and the Telx management team have done an excellent job creating premier facilities for interconnection," said Larry Hamelsky, Managing Director of Berkshire Partners. "We look forward to partnering with them as they continue to build on this platform to service their clients' increasing demand for network centric applications."

"We have been extremely pleased with our GI partnership," said Shepcaro, who said GI had provided "valuable insights, resources and intensive operational engagement as we expanded our business and identified select add-on acquisitions."

"We are pleased with the performance of Telx under our ownership and the gains we and the management team have achieved," said Howard Park, a Managing Director of GI Partners. "We believe that under the ownership of Berkshire and ABRY, both of whom have experience investing in this sector, the company will continue to grow within its existing facilities and selectively identify domestic and international expansion opportunities."

Who were some of the other bidders? ? One may be CoreSite, which reported expenses of $700,000 in the second quarter tied to "pursuing a potential acquisition, which the company is no longer pursuing."

Shepcaro said he would continue with the company, and that for customers it will be business as usual. "We're going from having one great private equity owner to two great investment firms." 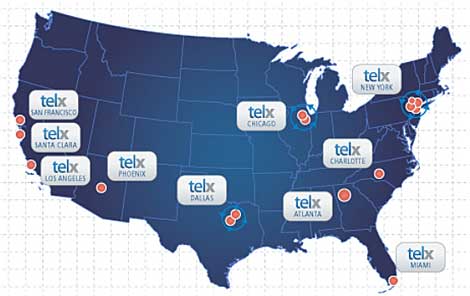 A network map of Telx colocation and interconnection facilities.