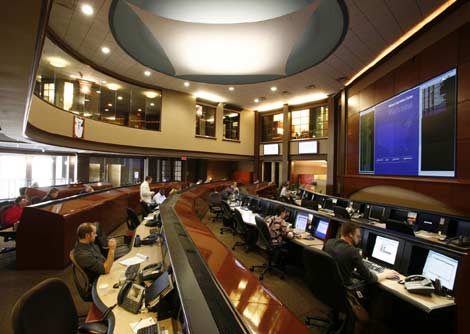 The PAETEC network operations center. The company has been acquired by Windstream.

PAETEC is best known as a telecom service provider, but also operates 1.4 million square feet of colocation space, with two sites apiece in Pennsylvania (Bethlehem and Conshohocken) and Virginia (McLean and Richmond) in addition to facilities in Andover, Mass.; Milwaukee, Houston and Phoenix. That's a much more substantial footprint than Hosted Solutions, which had about 68,000 square feet of managed hosting space in its three data centers, which Windstream has since expanded.

"The combined company will have a nationwide network with a deep fiber footprint to offer enhanced capabilities in strategic growth areas, including IP-based services, data centers, cloud computing and managed services," said Jeff Gardner, president and CEO of Windstream. "Financially, we improve our growth profile and lower the payout ratio on our strong dividend, offering investors a unique combination of growth and yield."

"Our combination now creates a new Fortune 500 company with the financial strength and scale to compete and win against any other provider in the industry," said Arunas Chesonis, chairman and CEO, of PAETEC. "Together, with far denser network assets, an expansive fiber infrastructure, and larger data center footprint, I believe our brightest days are ahead."

PAETEC shareholders will receive 0.460 shares of Windstream common stock for each PAETEC share owned under the terms of the agreement. Windstream expects to issue approximately 73 million shares of stock valued at approximately $891 million, based on the company's closing stock price Friday. Windstream also will assume or refinance PAETEC's net debt of approximately $1.4 billion at the time of closing. PAETEC stockholders are expected to own approximately 13 percent of the combined company upon closing of the transaction.

Industry watchers says the deal allows Windstream to become a national CLEC, with the colocation business as an attractive add-on. "Windstream is also likely looking at PAETEC’s early move on the cloud and its datacenter footprint, which would seem to fit well with the Hosted Solutions acquisition of last fall," Rob Powell writes at Telecom Ramblings. "Windstream expects to derive $100M in annual operating cost synergies with a net present value of $250M."