Pushing the boundary of high-density computing, SeaMicro today introduced a new version of its next-generation server that packs 768 Intel Atom cores into a 10u server chassis. 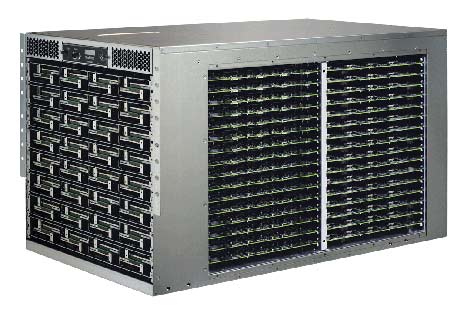 Pushing the boundary of  high-density computing, SeaMicro today introduced a new version of its next-generation server that packs 768 Intel Atom cores into a 10u chassis. The SM10000-64HD (high-density) extends SeaMicro's mission to develop servers with improved energy efficiency that can pack more computing power into every square foot of data center space.

SeaMicro is one of several closely watched initiatives to adapt low-power processors in servers to help manage soaring power use in data centers. The Sunnyvale, Calif. company makes x86 servers powered by scores of Atom chips, which have been widely used in mobile devices.

The new server is optimized for cloud computing companies deploying armadas of servers to manage huge web traffic. "The rate of growth and type of work being done by computers is being defined by Facebook and similar Internet companies," said SeaMicro CEO Andrew Feldman.

Boosting Density from 512 Cores to 768 Cores

SeaMicro's initial server featured 512 Intel Atom cores working together in a networked computing fabric. By harnessing a large number of low-power processors to work together,  the SM-10000 offered dramatic reductions in power and space usage for that level of computing power. The SeaMicro SM10000 is in production at companies like Skype, Mozilla, eHarmony, France Telecom,Rogers Wireless and China Netcom.

With the SM10000-64HD, SeaMicro has boosted the compute density by re-engineering its basic 5-by-11 inch server board to accommodate six Atom  1.66 GHz N570 dual-core processors, instead of the four chipsets seen in its initial server.

The increased density is not without tradeoffs - the new server uses 3.5 kilowatts of power, compared to 2 kilowatts for its predecessor. While the physical footprint remains the same - the SM100000-64HD is heavier. But Feldman says the gains in computing power outpace the additional total power and weight in the 10U chassis.

Customers can pack four SM10000-64HD into a standard rack, providing  3,072 Atom cores in a 14 kilowatt rack. SeaMicro says this configuration allows the SM10000-64HD to replace 60 traditional servers, four top of rack switches, four terminal servers and a load balancer while using one-fourth the power and taking one-sixth space — all without requiring any changes to software.

As it pushes for higher-density and lower power usage, SeaMicro also aims to accelerate the pace of server innovation by providing regular updates to its technology.

“SeaMicro has delivered three server systems in nine months," said Zeus Kerravala, senior vice president and distinguished research fellow, Yankee Group. "Over that time, the company has increased density by 150 percent and increased its lead in the all important compute per-watt metric. This rapid rate of innovation is a testament to the flexibility and extendability of its system architecture particularly its supercompute style fabric and system software.”

The SeaMicro architecture can support any type of processor. Feldman says the company found Atom to be the best starting point, but is evaluating other processors.

"In our lab, we have under development nearly every imaginable CPU that copuld be used in a server," said Feldman. 'Bigger CPUs, smaller CPUs, you name it. We are constantly talking to customers about their needs, as can adapt as we need. That's the beauty of the architecture."

The SeaMicro SM10000-64HD is available now in the U.S. and at "select international locations." The US list price for a base configuration is $237,000. 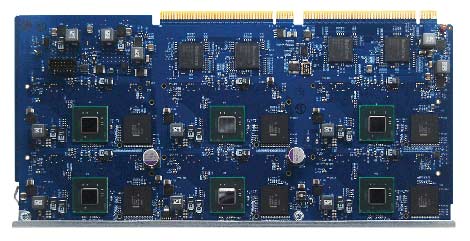 The board for the SeaMicro SM10000-64HD, with six Intel Atom Chipsets on the bottom hald of the board and SeaMicro's customer ASICs at the top.