Can a low-key web hosting company from Pittsburgh build one of the world's most efficient data centers in the desert? pair Networks recently broke ground on a data center project in Las Vegas that will be powered entirely by a combination of an on-site cogeneration plant and a rooftop array of solar panels, using the utility grid only for backup. 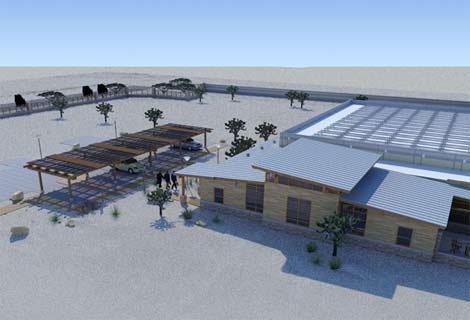 An illustration of the future pair Networks data center that is under construction in Las Vegas.

Can a low-key web hosting company from Pittsburgh build one of the world's most efficient data centers in a desert? pair Networks recently broke ground on a data center project in Las Vegas that will be powered by a combination of an on-site cogeneration plant and a rooftop array of solar panels, using the power grid only for backup power.

"Once it's up and running, it should be the most efficient data center in the world," said Tim Gaichas, executive vice president of business development for pair Networks. That's an ambitious claim. How will pair achieve this goal? The company is keeping mum about some details of its design, at least for the moment.

"We have been quietly designing this facility for over three years," said Gaichas. "There might be similarities to other concepts that have been published, but everything in this facility we have designed on our own. Everything in it, from the ground up, has been designed for maximum efficiency as well as Earth friendliness."

For most data centers, ultra-efficient designs focus on reducing the energy required for cooling systems, often through the use of free cooling, the use of fresh air from outside the data center to cool servers directly (air economization) or support a heat exchanger system.

"We are using air-side economization, but we're doing something else that we are not aware that anyone else is doing," said Gaichas. "We'll talk more about that as the project progresses. We need to maintain the pretty substantial head start that we have, when it comes to data center design in general, and green facilities design specifically."

So who is pair Networks? Its one of the oldest web hosting providers in the industry. The company was founded by CEO Kevin Martin and several other Carnegie Mellon alumni in early 1996, and has remained privately held during several periods of intense acquisition activity in the hosting sector. pair Networks has expanded beyond its initial focus on shared hosting, and now offers dedicated servers and colocation as well.

As the company has grown, it has expanded several times into larger data centers. But the Las Vegas facility marks pair Networks' first expansion beyond the Pittsburgh area.

"We see Las Vegas as the 'Pittsburgh of the West,' " said Gaichas. "From a network point of view, this allows us to reach everyone in North America pretty efficiently. Our customers based in Europe might prefer our Pittsburgh facilities, and our customers in the Pacific Rim might prefer the Las Vegas facilities. This allows us to not only extend our reach and add new multi-facility services to our mix of offerings, it also allows us to sell more services, and increase revenues, across the long term."

One thing pair is talking about publicly is its approach to on-site power. "We are going to generate the power on site with a large solar array and an on-site power plant that uses natural gas and cogeneration," said Gaichas. "The entire system is 'grid interactive' and the power grid is the backup, and not the primary source of power. Our goal is to use zero grid power. The offices are designed to be net-zero, and the datacenter will be net-zero for a short period of time after the facility opens, and then have a very low environmental impact for the rest of its life."

The project will be built out in phases, with granular control over the deployment of new space.

"The over-all concept is based loosely on the modular building concept, but it goes well beyond that because we are not limited to any one size, shape, or configuration," said Gaichas. "The construction will be done in phases and the individual data centers will be deployed in sections and sub- phases. We are not stuck with somebody else's idea of how things should be done, especially when their idea of how a data center should be configured might not work for us at all.

"The entire project is future-proof in that we can reconfigure our current or future phases based on the needs of our customers, the technologies at the time, and our own needs as a company," he added. "That is possibly the most revolutionary aspect of our design concept -- we are not locked in to anything."

Gaichas said pair Networks will seek Platinum rating under the LEED ( Leadership in Energy and Environmental Design) program, the highest level attainable in the voluntary rating system for energy efficient buildings overseen by the US Green Building Council. He said pair also expects the Las Vegas data center to operate at a Power Usage Effectiveness (PUE) of 0.96.

The PUE metric championed by The Green Grid compares a facility’s total power usage to the amount of power used by the IT equipment, revealing how much is lost in distribution and conversion. The average PUE is about 1.8, with the lowest measurements hitting between 1.05 and 1.1. A measurement below 1.0 is theoretically achievable when on-site power generation is included. Many data center professionals don't recognize claims of a PUE below 1.0, saying it is not in the spirit of the metric. But in its latest update on PUE measurement (PDF), the Green Grid has included guidance for companies using on-site cogeneration or reusing waste heat from servers.

"We have calculated our PUE of 0.96 based on the power use modeling data that we have from the design," said Gaichas. "We won't know the actual PUE until the facility is complete and fully operational. We will publish all of our data from that point forward. We are confident that it will be lower that 1, based on our systems and realistic calculations."

Some in the industry might be skeptical of pair'sambitions, given that most ultra-efficient data centers have historically been built by huge Internet companies or multi-national corporations. Gaichas noted that pair Networks has always charted its own course.

"Keep in mind that we have been in business longer than any other large- scale Web hosting provider," said Gaichas. "We are a privately held company, we manage our own private data centers, we have no investors, we've never been acquired or merged with anybody, we have had the same owner/CEO since day one, the management team is made up of folks that have been with the company for over a decade, and we plan on being around for decades to come. We take a long-term and sustainable approach to everything that we do, and this expansion fits right into that philosophy." 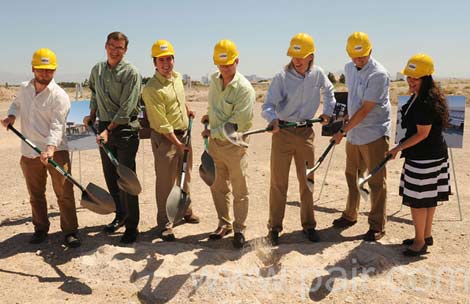