United Metal Products, which specializes in evaporative cooling and modular chilled water plants, found the data center industry moving in its direction not once, but twice. 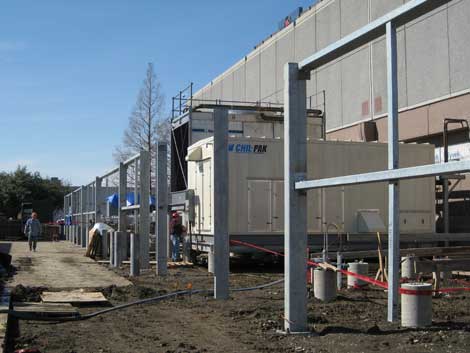 A look at a Chil-Pak modular chilled water plant installation, with one module in place and space for additional units to expand when more capacity is needed.

Some vendors of cooling equipment have made a conscious decision to adapt or expand their product lines to target mission-critical facilities. It was a slightly different story for United Metal Products, which found the data center industry moving in its direction – not once, but twice.

United Metal was founded in 1978 and specializes in evaporative cooling,  and has deployed its cooling units for a broad range of industrial customers to cool more than 300 million square feet of space. For the first 25 years of the company’s existence, data centers weren’t a meaningful customer segment. But as data centers grew larger, their operators began seeking more efficient ways to manage their cooling. Many turned to evaporative cooling.

"About three or four years ago we saw an uptake in use of evaporative cooling in the data center world," said Steve Kinkel, the Chief Executive Officer of United Metal Products.  "That basically changed our world. We've been here for 30 years, and the data center world moved over the top of us. Over the last three years we've sold several nice projects. We're just applying what we knew."

"Our system uses use two vertical wheels," said Kinkel. "It's nothing new. We've been building these for 20 years. All these are technologies we developed and used in other industries. The heat wheel industry is small. We are experts in a very small niche."

Kinkel says evaporative cooling has benefited from the focus on energy efficiency, which has prompted many data center operators to scrutinize their approach to cooling. United Metals has focused on companies building large data centers.

"We're moving from legacy to processed cooling, especially the large single-user data centers," said Kinkel. "When you get into the evaporative cooling world, the size and volume of water needs to be handled correctly and efficiently. Obviously, the large owner users will be the first to adapt."

United Metals’ sister company, Chil-Pak, has also benefited from an emerging data center trend – in this case, the move toward modular design. Chil-Pak makes modular chilled water plants for data centers that can be deployed to speed a greenfield build or to add cooling capacity to a facility that has maxed out its existing chiller plant. Chil-Pak has focused on the deployment model, and works with Carrier, York and Trane products. Kinkel says the cooling modules can be deployed in a smaller footprint than a standard chiller plant.

"Ten years ago we partnered up with Chil-Pak and developed a packaged central plant that was modular," said Kinkel, who also serves as President of Chil-Pak. "The secret sauce is packages that can be shipped."

Chil-Pak’s experience with modular delivery has positioned to benefit from the growing adoption of factory-built infrastructure that is deployed on-site.

"I want to become the cooling arm of the modular business," said Kinkel. "I want to be the (cooling) cassette to fit into these modular offerings."