The industry's only IPO of 2011 turned out to be the best performing stock for the second quarter. Interxion, the European hosting and data center specialist, saw its shares gain 16.5 percent.

The industry's only IPO of 2011 turned out to be the best performing stock for the second quarter. Interxion, which went public on Jan. 29, ended the first quarter at its IPO price of $13. But in the second quarter, the European hosting and data center specialist saw its shares rise to $15.14, a gain of 16.5 percent. Here's a look at our Data Center Investor quarterly update for the three-month period ending June 30: 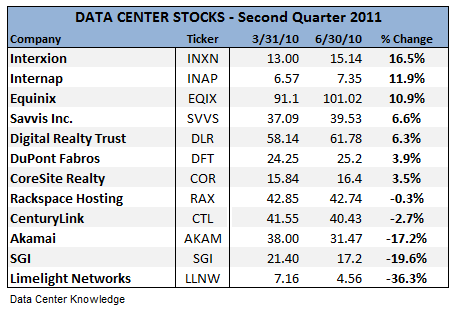 Colocation companies Internap and Equinix each had double-digit gains for the quarter. Equinix has moved back above $100 a share, and has now regained nearly all of the ground lost in a  sharp selloff last October. The three publicly-traded data center REITs (Digital Realty Trust, DuPont Fabros and CoreSite were next, improving by 4 to 6 percent on the quarter.

By comparison, the Dow Industrials gained 0.7 percent during the quarter, whikle the NASDAQ index lost 0.3 percent and the S&P 500 was down 0.4 percent.

It was another tough quarter for the public content delivery networks (CDNs). Akamai and Limelight Networks saw their shares slide amid competition from carriers.

We've added Century Link (CTL) to the list, as it bought Qwest and will soon complete its acquisition of Savvis. Exiting are managed hosting providers Terremark Worldwide (acquired by Verizon) and NaviSite (bought by Time Warner Cable).

At the midway point of 2011, a solid majority of  data center stocks are outperforming the market in a big way.  The Dow was up 7.2 percent for the first half of the year, while all but three companies (the CDNs and Century Link) easily beat that performance. The strongest performer was SGI, which lost some ground after a huge gain in the first quarter of the year, followed by the three companies whose shares were boosted by acquisitions: Savvis, NaviSite and Terremark. Here's a look at the first-half results. 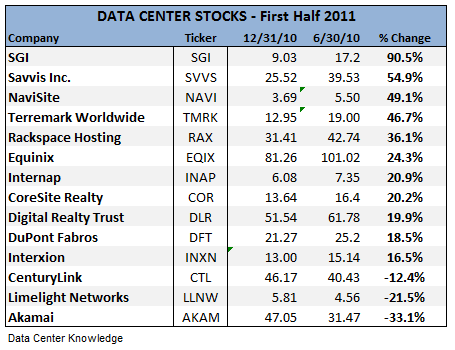