Tilera today is unveiling a new line of many-core processors optimized to help the Internet's largest players slash their power bills. The TILE Gx-3000 chips are optimized for companies that are customizing their data center infrastructure to deploy applications across thousands of servers. 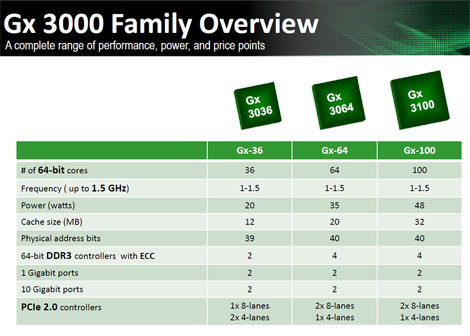 The specs for the new family of Gx 3000 processors from Tilera (Click for larger image).

Tilera today is unveiling a new line of many-core processors optimized to help the Internet's largest players slash their power bills. The TILE Gx-3000 chips are optimized for companies that are customizing their data center infrastructure to deploy applications across thousands of servers - players like Google, Facebook and Zynga.

Tilera is among a closely-watched group of companies providing low-power chips and servers targeting some of the biggest challenges facing Web-scale companies with mounting power bills. Tilera says its new 64-bit processors, which pack up to 100 cores into a single node, offer better power efficiency than current x86 chips and more computing muscle than new next-generation rivals based on Atom and ARM chips.

The company clearly believes that in offering an alternative to Intel and AMD x86 chips, the largest data centers are the best place to  establish a beachhead.

"We've been working with top data centers to optimize for their requirements," said Ihab Bishara, the director of marketing at Tilera. "We think it's these top guys who are willing to bring in a new architecture. They are doing a lot of customization at the board level with processors. We're working with their supply chain."

That includes Quanta Computer of Taiwan, which is an investor in Tilera and is emerging as a key player in the market for custom cloud servers. Quanta is an original design manufacturer (ODM) that customizes notebook and server designs for large customers. These include Facebook, which chose Quanta to build thousands of custom servers for its new Oregon data center. Quanta is also rumored to be a source for custom servers at Google, prompting recent reports that Google is test-driving servers using Tilera chips.

Without naming names, Tilera says the TILE-Gx 3000 family was "co-developed with some of the world’s largest Internet brands" over the past two years. Tilera says each Gx 3000 core consumes less than 0.5 watts of power. Bishara said a full rack of Tilera-based servers would require about 8 kilowatts of power, while offering significant improvements in performance-per-watt.

"The Gx-3000 series hits the sweet spot of high performance and low power," says Troy Bailey, VP of Marketing at Tilera. "Our cloud customers are very excited about the Gx-3000 series. Many have already placed orders.”

Tilera has been shipping many-core processors since 2007. Tilera uses an architecture that eliminates the on-chip bus interconnect, a centralized intersection where information flows between processor cores or between cores and the memory and I/O. Instead, Tilera employs an on-chip mesh network to interconnect cores. Tilera says its architecture provides similar capabilties for its caching system, evenly distributing the cache system load for better scalability.

Bishara says Tilera's focus on standardization and support for Linux will appeal to some of these large customers.

"One of the beautiful things about this market is that the software stack is so simple," he said. "Any new player just needs to be sure they run these applications well. Most of these guys are using a CentOS package, and some maintain their own custom Linux distribution.It will look and feel like any other Linux box in their data center. "