Facebook is moving ahead quickly on construction of its next huge data center. The $450 million project in Rutherford County, North Carolina will be the second company-built data center for Facebook. 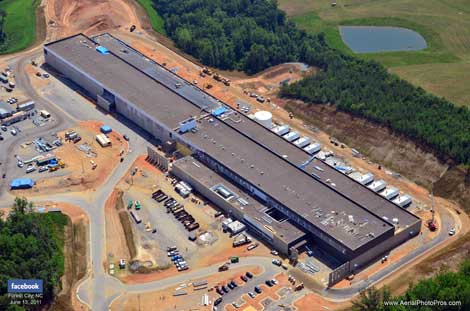 Facebook is moving ahead quickly on construction of its next huge data center. The $450 million project in Rutherford County, North Carolina will be the second company-built data center for Facebook, which just unveiled its first server farm in Prineville, Oregon.

The North Carolina facility was announced in November 2010. Facebook has already completed the exterior structure for the 300,000 square foot building, and has cleared a nearby site where the company could build a second huge data center down the road.

The first phase of the Rutherford County project will be operational in the first quarter of 2012. The data center is expected to create more than 250 construction and mechanical jobs during its 18-month building phase. When construction is completed, the data center will employ around 35-45 full-time and contract workers

Facebook says the North Carolina facility with be an energy-efficient data center, and employ many of the techniques used to conserve power at its Prineville site. The Oregon facility will use evaporative cooling instead of a chiller system, continuing a trend towards chiller-less data centers and water conservation.

One meaningful difference: The North Carolina site is in a warmer climate, which will reduce the scope of free cooling. But the facility will likely mirror Prineville’s practice of re-using excess heat expelled by servers to heat office space in the building.

Inside the building, Facebook is expected to implement the server and data center designs outlined in the Open Compute Project, which the company launched in February to release its custom designs for servers, power supplies and UPS units.

Facebook has purchased 150 acres of land from Rutherford County. The company has completed demolition of a former Mako Marine factory located on the site,  providing a second site suitable for data center construction if additional capacity is needed in the future. No decision has been made about whether and when to build a second structure, Facebook said.

The Facebook project adds to a growing cluster of the largest Internet companies in western North Carolina, where Google and Apple have already built major facilities.

For more about Facebook's data centers,see our previous coverage: