According to a new Nielsen report, already one in four US adults have smartphones that are more powerful than the computers initially used to send men to the moon. Nielsen predicts that by the end of 2011, the majority of mobile subscribers in the US will have smartphones. What may that mean for mobile apps? Let's take a look at some data on recent trends.

Since 2009, the Nielsen Company has issued an annual survey called the Mobile Apps Playbook, monitoring and providing information about the mobile app ecosystem. According to the latest survey, games continue to be the most popular category of apps for both smartphones and feature phones. 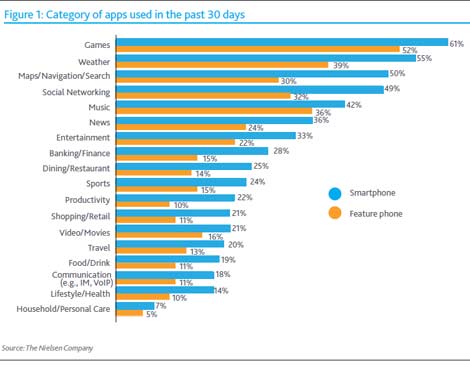 Not surprisingly, Facebook tops the list of the most popular apps on all smartphone operating systems. Other popular apps include Twitter, the Weather Channel, Google Maps and Pandora music service. No surprises there. Most applications are found through searching and through recommendation from friends and family members. Ratings and reviews are important when it comes to deciding which apps are downloaded.

When it comes to advertising, younger users are more receptive, with 58 percent saying that they “always” or “sometimes look at ads.” According to the report, men are more receptive to mobile ads than women. Users prefer to view mobile ads within an app rather than on the outside or when searching. However, those who viewed a mobile ad most often took the action of using a search engine to find out more information. Only eight-percent purchased advertised product/service immediately.

When it comes to mobile devices beyond cellphones, the iPod Touch currently sees the most app downloads, followed by Sony PSP and Apple iPad. The Nielsen report concludes that app download will increase enormously for all kinds of connected devices in mobile media.

Some of the interesting conclusion from the report include the preference of Android users for free apps. One of the reasons could be a younger and less affluent user segment compared to iPhone users. This segment is more likely to click an ad within an app, which spells a clear monetization opportunity for mobile advertisers.

Moreover, Blackberry users lag behind both iPhone and Android users when it comes to app download. This probably has to do with limited selection in the Blackberry App World compared to Apple App Store and Android Market.

Finally, and perhaps most importantly, apps are still a very young market and leaders of today may become the laggards of tomorrow. Therefore, there remains plenty of room for new innovative apps. Some of the new app categories to follow include augmented reality and various mash-ups.