<img src="/sites/datacenterknowledge.com/files/wp-content/uploads/2011/06/IPv6-arbor.jpg" alt="" width="470" height="253" /> World IPv6 day has come and gone with no major incidents, a burst of publicity and a modest bump upwards in the volume of Internet traffic over IPv6. 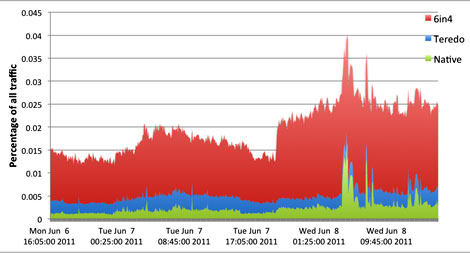 World IPv6 day, an event designed to test the readiness of major networks for the coming transition to a new version of the core Internet protocol, has come and gone with no major incidents and a bump upwards in the volume of Internet traffic over IPv6.

The event generated widespread coverage in the technology press, achieving a secondary goal of raising awareness of the pending exhaustion of IPv4 and the need for stragglers to implement support for IPv6.

IPv6 will dramatically expand the number of addresses available for web sites, as well as millions of mobile devices with Internet access.

A "Great Step" Towards Transition
IPv6 is vital to the continued growth of the Internet, and World IPv6 Day was a great step in the advancement of the protocol," said Donn Lee, a network engineer at Facebook. "We successfully enabled IPv6 on our site for 24 hours, with great results. We saw over 1 million users reach us over IPv6.

"We hope the overall success of the 24 hour test will encourage others in the industry to establish reliable IPv6 connectivity and develop robust IPv6 products," said Lee.

By most measures, IPv6 traffic represents less than 1 percent of Internet traffic. More than 430 companies and organizations participated in Wednesday's test, including Google, Facebook, Yahoo, Akamai, Limelight Networks, Cisco, Hurricane Electric and Internap. The event was tracked by monitoring at RIPE Arbor Networks, Akamai and the Internet Society.

"We saw a dramatic jump in IPv6 traffic beginning in the afternoon on June 8, increasing more than 2,500 percent," said Amar Khan, VP of IP Services at Internap. "Outside of World IPv6 Day, enterprise customers are still not rushing to adopt IPv6 on a broad scale at this point, although we have seen a slow and steady increase in traffic in recent months. We’ll likely begin to see more urgency when IPv4 space is fully exhausted and as IPv6-only content and websites come into existence."