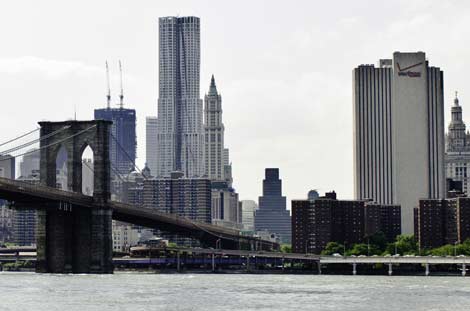 Sabey has acquired 375 Pearl Street, the former Verizon building at the right in this photo. The Brooklyn Bridge is on the left.

Sabey will outfit the property with all new core infrastructure while expanding its connectivity prior to opening in early 2012, the company said. Sabey also plans to upgrade the building's power capacity from the current 18 megawatts to 40 megawatts.

Sitting at a confluence of the world’s transatlantic cable and fiber routes, 375 Pearl Street is a crucial presence as our Sabey Data Center network expands," said John Sabey, President of Sabey Data Center Properties. "We are bringing a well-respected data center brand to transform this unique Manhattan asset. Twelve months ago we announced our intention to expand nationally; the Pearl Street acquisition is a testament to our confidence in the future of lower Manhattan, the data center industry, and our commitment to our constantly expanding tenant base."

Sabey's current tenants include Microsoft Corporation, JP Morgan Chase, Savvis, Internap, VMware and T-Mobile. The company said it expects that many of Sabey’s existing customers to be actively interested in space at Intergate.Manhattan.

Sabey has more than 20 years of experience in the data center business and is perhaps the largest provider of hydro-powered facilities in the United States. Its properties include the huge Intergate.East and Intergate.West developments in the Seattle suburb of Tukwila and the Intergate.Columbia project in Wenatchee, Wash. Sabey is also building a data center complex in Quincy, Wash. that will be called Intergate.Quincy.

375 Pearl Street is a 1.15-million-square-foot office building on the East Side of Manhattan. The 32-story building was originally developed in 1975 for Verizon as a telecom switching hub and has recently served as a back office facility. It was purchased in 2007 by Taconic, which later abandoned plans to redevelop the property. Verizon continues to occupy three floors.

Manhattan developer Young Woo & Associates will be a minority owner of 375 Pearl Street. Young Woo is an experienced player in both the  Manhattan real estate industry and the data center industry. Young Woo’s data center and telecom projects include a major financial data center in Carteret, N.J. and several New York communications hubs at 325 Hudson Street and 85 10th Avenue, where Telehouse has just opened a new colocation facility.

John Sabey said his company was excited to be part of lower Manhattan's "ascendance as a world capital for data-based enterprises of all types." He said Intergate.Manhattan would appeal to "new scientific, academic and medical research centers" in addition to data center tenants.

"The largest areas of growth for data centers are in the financial, internet-based service and networking, insurance, and healthcare sectors, particularly in life sciences research," said Sabey. "Mission critical computing in these areas demands varying levels of availability and latency sensitivities. Indeed, the most infinitesimal delay in a single computer operation can be harmful. For these enterprises and for multi-national companies originating in Europe and looking to establish a North American data center location, New York is typically a prime choice."

Sabey's purchase of 375 Pearl Street comes at as time of flux for the Manhattan data center market. After buying 111 8th Avenue, Google has discontinued efforts to lease vacant space at the historic New York telco hub, apparently intending to dedicate the remainder of the building for use as Google office space.

"As the few major existing data centers and carrier hotels in Manhattan are nearing capacity from space, power, and cooling perspectives, we view 375 Pearl as an asset uniquely positioned to offer a world class computing environment for those users with on-island data center needs," said Chris Trapp, Sabey’s Vice President of Acquisitions & Leasing.  "The building has all the bones - an abundance of power, a purpose-built structure, and tremendous prospects from a connectivity standpoint to be just that."

Sabey said it has hired Joseph Ryan as Managing Director Development for New York, heading the development of Intergate.Manhattan. Ryan boasts 28 years of experience at Tishman Construction during which he helped establish Tishman Technologies Corporation. 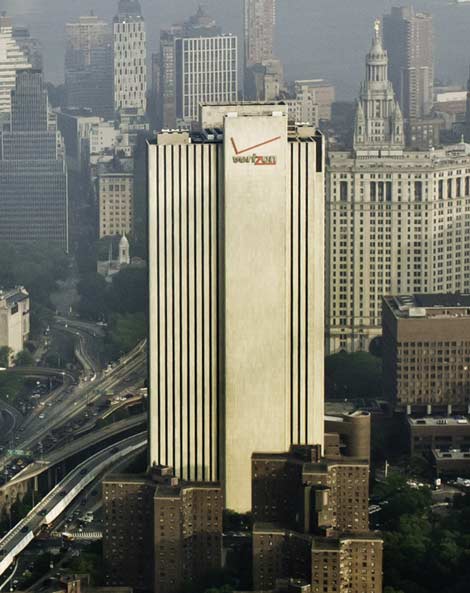 A better look at 375 Pearl Street in Manhattan, which will be redeveloped as Sabey.Intergate.