HP has unveiled an updated version of its modular Performance Optimized Datacenter (POD), expanding its capacity with a "double-wide" design that joins two 40-foot containers. The new EcoPOD can use outside air to cool up to 44 racks of servers. 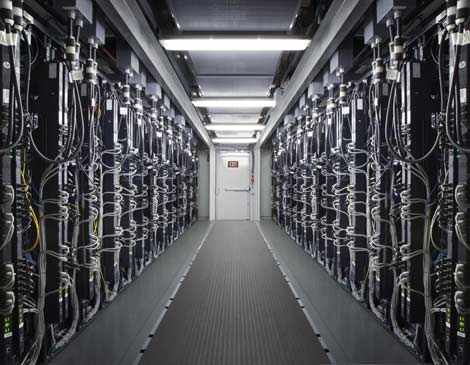 A look inside the hot aisle in a new HP EcoPOD modular data center, which joins two 40-foot enclosures to create a wider server room.

HP has unveiled an updated version of its modular Performance Optimized Datacenter (POD), expanding its capacity with a "double-wide" design that joins two 40-foot containers. The new EcoPOD also adds the ability to use outside air in its cooling system, an important capability in the increasingly competitive  market for modular data centers.

The EcoPOD  advances HP's focus on designs that go "beyond the container" and offer products that look and feel more like enterprise data centers than the ISO-standard shipping containers that marked the first generation of modular products.

Houses Up to 44 Racks of Gear
HP says the EcoPOD can house as many as 44 industry standard racks of IT equipment in two rows, a configuration enabled by the wider design, which features two cold aisles and a shared eight-foot wide hot aisle in the center of the unit. A cooling module atop the EcoPOD offers several options, including the use of outside air or Direct Expansion (DX) cooling, based on conditions. HP says the unit compresses the workload of a 10,000 square foot data center into 900 square feet, and can be available in about three months.

HP is promoting the unit as the "world's most efficient modular" data center, touting expected Power Usage Effectiveness (PUE) ratings  of 1.05 to 1.30. Since HP has made this claim, we'll note that HP's air-cooled POD had the second-lowest PUE in a recent evaluation of leading modular data centers by Lawrence Berkeley Labs (PDF), with its rating of 1.04 trailing a 1.02 reading for an air-cooled modular unit from SGI.

Setting aside the PUE Olympics, the efficiency ratings for the EcoPOD certainly place it on a competitive footing with other modular designs offering free cooling, a group including SGI ICE Cube, BladeRoom, i/o Anywhere, the Dell DCS  modular unit and even Microsoft's IT-PAC design, which has recently been licensed to Savier. The growing number of players in the modular market is creating a virtuous cycle in which competitors are continually revising their designs to enhance their efficiency and usability.

Adaptive Cooling Can Switch Modes
The EcoPOD features a cooling system that can automatically adjust its operations based IT load and climate. Depending on environmental conditions and IT load, the cooling system automatically adjusts to use ambient air where possible, switching to direct expansion cooling mode when it is too warm to use outside air. The new unit also includes a programmable environmental control system that provides remote management capabilities and can tie into existing building control systems.

The EcoPOD is currently available in limited qualities to HP clients, with broader availability expected at the end of 2011 in North America and globally in 2012. But early adopters like the new form factor.

"The revolutionary, low-cost, modular approach to data centers will dramatically increase our compute power while using one-tenth of the typical data center space," said Laura Patterson, chief information officer, University of Michigan. "The compelling energy savings demonstrates reducing operating costs can be done in a sustainable way, which is a top priority of our campus."

The fact that a university is the initial reference client reflects the potential for the EcoPOD to support high performance computing (HPC) environments, where colleges are a key customer set.

"While the EcoPOD serves a broad range of customer data center needs, I expect we will see a number of HPC cluster deployments in EcoPOD based on the early configurations HP’s HPC Competency Center has worked on this year," writes Marc Hamilton, HP's vice president for HPC (link via InsideHPC). "A single HP POD 240a can easily contain a complete PetaFlop cluster and with an industry leading PUE your PetaFlop cluster will cost substantially less to power than a similar cluster running in almost any existing data center."