The iDataCenter and the Eye in the Sky

The web was awash in conspiracy theories Wednesday after the new Apple data center in Maiden, North Carolina "suddenly" appeared on satellite imagery from Google Maps. Were there cahoots between the two companies? It doesn't look that way. Are there facilities that are "stealthed" on Google Maps? Yep. 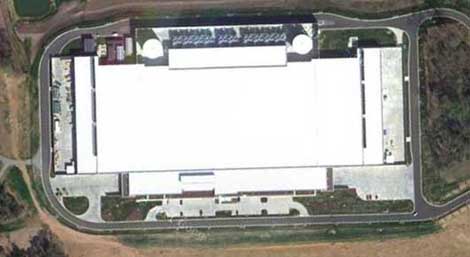 When it comes to secrecy and speculation, the combination of Apple and data centers is fertile territory indeed. The blogosphere was awash in conspiracy theories Wednesday after the new Apple data center in Maiden, North Carolina "suddenly" showed up on satellite imagery from Google Maps and Google Earth. For many months, the satellite view had shown undisturbed forest where data center construction should be.

What gives? Why does the iDataCenter suddenly appear, just a day after Apple confirms the existence of its iCloud cloud computing service?  "How was Apple able to keep Google from displaying this particular swath of satellite imagery - imagery provided by the USDA Farm Services Agency?" wondered Fortune. "That's still a mystery."

It's tantalizing to envision clandestine meetings in which Steve Jobs and Eric Schmidt negotiated the date when the iDataCenter could first be seen from space. The truth appears to be less sensational.

As it turns out, Google just did a large update of its satellite imagery, which it announced on the Google Lat Long Blog. "We regularly update our imagery in Google Earth in order to provide our users with the richest, most up-to-date imagery possible," a Google spokeswoman told NBC. "In this case, we updated our aerial imagery recently in Lenoir, N.C., which we announced on May 20, 2011."

Are Some Facilities "Stealthed"?
That doesn't mean that Google has never selectively updated its satellite imagery based on the location of data centers. A case in point: Google’s data centers in The Dalles, Oregon are clearly visible on rival mapping sites from Microsoft and Yahoo, but nowhere to be found on Google Maps, which appears to be using imagery of The Dalles from before the data centers were built in 2006.

This is a little odd, given that the facility is one of the data center industry’s most photographed facilities. Pictures of the data center buildings at The Dalles have appeared on the front page of The New York Times, Information Week and in many photos on Flickr. A copy of Google’s site plan was published by Harpers.

But this treatment doesn't seem to reflect a policy decision by Google to obscure its major data centers on Google Maps. Other Google facilities can be clearly seen in the satellite view.

If you're a fan of this kind of thing, you'll definitely want to check out the feature "Data Centers From the Sky" over at Data Center Map.