Can the Mobile Cloud Resolve Fragmentation?

Can mobile cloud computing's capability to deliver cross-platform content help address the fragmentation in the mobile device market between Google's Android, Apple's iOS and offerings from RIM and Microsoft?

A new survey called the "Q2 2011 Mobile Developer Report" conducted by Appcelerator and IDC holds some interesting information about the mobile cloud and smartphone platforms.

According to the survey, interest in the Android platform among mobile app developers has recently plateaued, primarily due to concerns around fragmentation and disappointing results from early tablet sales running Android. At the same time, momentum is shifting back toward Apple and its iPhone and iPad. Furthermore, the survey reveals increased interest in the mobile cloud and mobile web that partially addresses the problem of fragmentation.

Fragmentation is a Drawback for Android

Interest in Apple iOS remains high, where 91 percent of survey responders say they are "very interested" in iPhone development and 86 percent in iPad development. However, reported interest in Android phones fell to 85 percent and to 71percent for Android tablets. Almost two-thirds of respondents claimed that device fragmentation in Android poses the biggest challenge to the platform.

At the same time, other mobile platform providers like Microsoft and Research in Motion (RIM) are expected to have a hard time catching up with market leaders Apple and Google. Two-thirds of responders think it‘s simply impossible at this point for any mobile platform to reverse the significant momentum advantage that iOS and Android now have.

When it comes to the mobile cloud, most agree that it has a rosy future. Over 80 percent of mobile app developers said they are building or plan to build mobile websites this year. The theory is that the mobile web will solve the cross-platform and cloud fragmentation dilemma.

However, the mobile cloud growth will be restrained at least as long as the user experience still favors mobile application, i.e. applications running natively on the handsets. End-users are already used to downloading native-apps to their handsets. In essence, the preference for mobile web favors reach, ease and speed over market opportunity and customer demand. However, the economic model strongly favors mobile apps as developers see a path to direct monetization with apps that is missing from the mobile web. 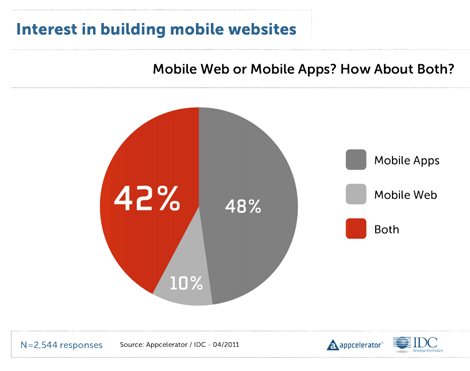 Still, the mobile web can also be seen as a good way to quickly get cross-platform coverage that is additive to mobile apps as a complement, not as a replacement. Therefore, a mobile strategy could be about a mobile-optimized website rather than necessarily a mobile app – as a complimentary channel.

Clearly, a lot has still to be figured out when it comes to mobile cloud deployment, especially mobile apps. It seems logical and beneficial from a business point of view. For example, as many businesses are in the position of determining a mobile strategy in the light of increasing complexities and fragmentation of mobile platforms and devices, the mobile cloud promises a way to overcome these limitations. Certainly it would be simpler to consider developing for the mobile cloud rather than fragmented platforms and devices. However, it still might be some time until this strategy becomes mainstream.