https://www.datacenterknowledge.com/sites/all/themes/penton_subtheme_datacenterknowledge/images/logos/footer.png
Recent
Recent
Top 5 Data Center Stories of the Week
Apr 03, 2020
Sponsored Content
Tools of the Trade: Enabling Centralized Management of Distributed or Remote IT Sites
10 Tools for Providing 24/7 IT Support to Remote Workers
Apr 02, 2020
Okta Partners with VMware, CrowdStrike to Boost Log-In Security
Apr 02, 2020
Google Data Centers’ Secret Cost: Billions of Gallons of Water
Apr 01, 2020
Featured
After Kubernetes’ Victory, Its Former Rivals Change Tack
Jan 27, 2020
Explaining Knative, the Project to Liberate Serverless from Cloud Giants
Jan 27, 2020
What Service Meshes Are, and Why Istio Leads the Pack
Oct 28, 2019
IT in 2020: A Look at the Year Ahead
Jan 10, 2020
Companies>Facebook

Officials in Prineville, Oregon say they are in discussion with two additional companies about building data centers in the town, where Facebook just opened its first company-built data center. 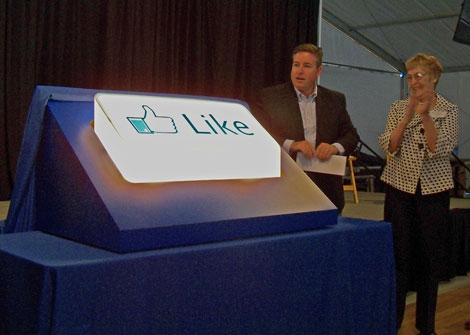 Lots of folks want to be friends with Facebook. Now several data center companies want to be their neighbor.

Officials in Prineville, Oregon say they are in discussion with two additional companies about building data centers in the town, where Facebook just opened its first company-built data center. Local officials said that interest in Facebook's facility had attracted interest from other companies seeking to leverage the town's ideal environment for using fresh air to cool servers.

"We are now actively engaged in talks with two other data center-type technology companies as a result of the city and county efforts to be proactive and Facebook's willingness to share the story of their success building a data center in Prineville," City Manager Steve Forrester told the Bend Bulletin (requires subscription or 50-cent day pass). Forrester said the names of the companies won't be released unless a project is finalized, but in the meantime they have the codenames "Project Campbell" and "Cloud."

The Facebook data center was known as "Project X" prior to its official announcement in January 2010. The 150,000 square foot first phase of the facility opened in April, and will be followed by a 150,000 square foot second phase to open later this year.  Facebook CEO Mark Zuckerberg traveled to Prineville for the grand opening, which was widely covered by news media.

Oregon’s cool, dry climate was a key factor in Facebook’s decision to locate its facility in Prineville. “It’s an ideal location for evaporative cooling,” said Jay Park, Facebook’s Director of Datacenter Engineering.  The temperature in Prineville has not exceeded 105 degrees in the last 50 years, he noted. Another new data center facility from Bend Broadband also takes advantage of the cool climate.

The central Oregon climate allows data centers to take advantage of  "free cooling," the practice of using cool outside temperatures to support the cooling systems. This approach allows data centers to use outside air to either cool water or provide direct air cooling for servers. Either approach allows companies to reduce their use of refrigeration systems, which use a large amount of energy.

More data centers would be a boost to the economy in Prineville. The Facebook construction project had an average of 243 workers per day on the site, which required about 228 "man years" of labor to complete.  A total of 88 subcontractors worked on the site, including 41 companies from the immediate area of Bend, Prineville and Redmond. Facebook has hired 35 full-time employees to staff the facility, who earn at least 150 percent of the median salary in the region.

"Facebook has brought diversity to the job market at a time when unemployment has ranged from 17 to 20 percent," said Prineville Mayor Betty Roppe. "During the past year Prineville has seen a loss of nearly 1,000 in population. Facebook's arrival has opened the market for other business recruitment. Their arrival has given the community a shot of optimism."