Will the Banking Industry Go Modular?

<img src="/sites/datacenterknowledge.com/files/wp-content/uploads/2010/07/colt-wide-modular.jpg"/> Some of the nation's largest financial institutions are taking a close look at modular data centers, and Gartner is now recommending that enterprise users evaluate modular designs when expanding their It operations. 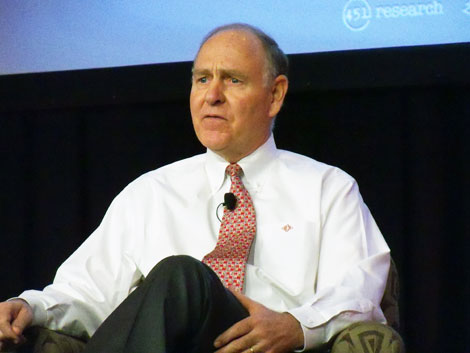 Is the financial industry ready to go modular? Big banks and Wall Street firms have been a key constituency for the data center industry, particularly in the greater New York market. Financial institutions are known for their appetite for single-tenant data centers, high security and low latency. At first glance, they may not seem like ideal candidates for modular data centers, which deploy IT capacity in factory-built enclosures.

But some of the nation's largest financial institutions are taking a close look at modular designs, as seen in a panel at The Uptime Symposium 2011 last week.

'Pay By The Drink'

"We think modular is the way to go," said Bob Cashner, Senior Vice President of Corporate Properties with Wachovia, a unit of Wells Fargo. "We're looking closely at that and doing some high-level schematic design. I think you'll see people move toward modular data centers. It allows us to pay by the drink."

Wells Fargo has more than 1 million square feet of data center space to support its 70 million customers, including 23 million who use Internet banking. It's a sophisticated user that operates its own lab to test-drive power usage and thermal conditions in its data centers. Cashner  says data centers account for 16 percent of the company's $180 million power annual bill - or about $28 million a year.

Running servers in shipping containers has been viewed as a niche play by many in the data center industry, limited to mobile requirements, temporary capacity, or novel designs like the cloud  computing facilities being built by Microsoft and Google. Analysts and industry watchers have debated whether the efficiencies of modular data centers would be embraced by enterprise users, who are sometimes slow to embrace new designs and form factors.

But new designs from HP, Dell and new players like BladeRoom and NxGen have gone “beyond the box” with designs that look more like traditional data centers than shipping containers. The change in vocabulary, from “containers” to ” modular” may also be easing any stigma attached to early container concepts.

The growing momentum for modular designs was reflected in a commentary last week from Gartner, one of the leading research firms advising enterprises on their IT operations. David Cappuccio, chief of research for the Infrastructure team at Gartner, discussed the growing appeal of modular designs.

"Modular data centers evolved from the basic premise of containers — that, if designed appropriately, extreme levels of performance could be attained in data centers using a consistent design technique, and capital costs could be reduced by standardizing components, construction and the supply chain," Cappuccio writes.

"When planning for data center growth, it is important that all alternatives be reviewed," he continued. "Newer modular design techniques and container-based solutions should be a critical piece of your analysis. When used appropriately, they can solve specific problems, while reducing capital costs and the time it takes to implement new capacity."