IBM recently published the results from its most recent biennial CIO survey – The 2011 IBM Global CIO Study. As usual, the report makes interesting reading, particularly a chart that articulates the increasing priority that CIOs are putting on both mobility solutions and cloud computing.

According to the study, both mobility solutions and cloud computing have increased significantly in relevance between 2009 and 2011, especially cloud computing, which is now firmly on the CIOs priority list. As in 2009, Business Intelligence and analytics still remain the CIO's top priority but cloud computing has almost doubled its relevancy – a true quantum leap. In IBM‘s 2009 CIO study, only a third of CIOs said they planned to pursue cloud to gain a competitive advantage. This year‘s study shows a dramatic increase in the focus on cloud, particularly in media and entertainment, which rose to 73 percent, automotive (70 percent) and telecommunications (69 percent). 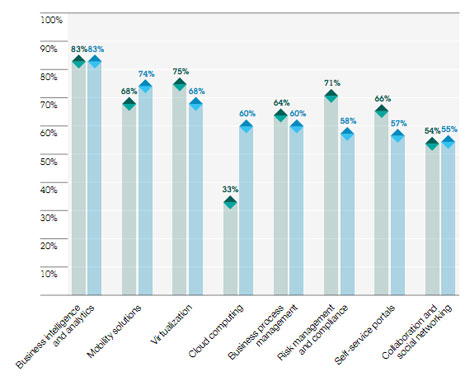 The increasing relevancy of mobility solutions and cloud computing is not surprising. In the past two years incredible development has incurred.

Handset manufacturers, including Samsung, HTC and Sony-Ericsson, have flocked to adopt the Android platform, accelerating the smartphone adoption rate. According to IDC Worldwide Quarterly Phone Tracker, January 27, 2011, a total of 302.6 million smartphone units were shipped in 2010, compared to 173.5 million units shipped in 2009, an year-over-year growth of 74.4 percent. The smartphone market is booming.

Similarly, the iPad has created a new benchmark for tablet computers as mobile devices. Gartner is predicting Apple will sell 47 million iPads this year, out of 70 million tablets worldwide, and that the overall number of tablets will grow to 108 million next year. Despite Android‘s growing market share in the tablet market, the iPad is expected to maintain its sales leadership until 2015, at least. "Tablets running the Android OS won‘t overtake the iPad, but they will increase their share of the market from 20 percent this year to 39 percent in 2015," according to Gartner.

When it comes to cloud computing, global sales forecasts are just as impressive. According to recent estimates from the research firm Forrester, the global cloud computing market is going to increase from about $41 billion in 2011 to $241 billion in 2020. Furthermore, Forrester estimates that the majority of cloud services will be delivered over the public Internet.

The cloud computing revolution is making its way through to mainstream technology and will soon be the core of IT infrastructure. Most new software companies entering the market will provide solutions built around SaaS service composition and delivery model. These will account for a major share of net growth in the software market. IaaS is growing similarly, although it is expected to reach a peak in 2014 and then enter a period of significant commoditization, price deterioration and margin pressure. Moreover, as the third-largest cloud category (after SaaS and IaaS) with a market size of $820 million in 2011, PaaS is predicted to see steady growth and to become a serious alternative for developing custom applications.