After a decade building his company into a major player in cloud computing, Terremark CEO Manuel Medina said Thursday that he will step down on May 31. The CEO's departure follows Terremark's acquisition by Verizon in a $1.4 billion deal that capped his tenure. 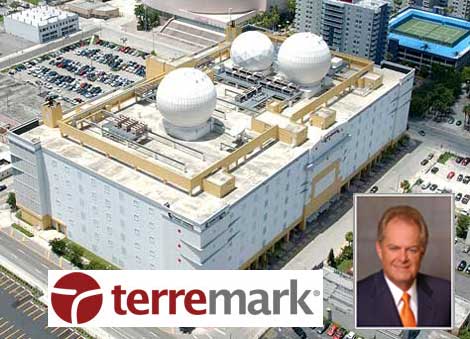 Terremark CEO Manuel Medina (inset) and the NAP of the Americas in Miami. Medina is stepping as CEO of Terremark.

After a decade building his company into a major player in cloud computing, Terremark CEO Manuel Medina said Thursday that he will step down on May 31. The CEO's departure follows Terremark's acquisition by Verizon in a $1.4 billion deal that capped his tenure and provided a major validation of Medina's vision for the growth of the Internet.

"I’ve had the privilege to lead Terremark and our amazing team of professionals for more than 30 years and I feel that now is the perfect time to step aside and allow the next generation of leaders to build on the success we have achieved," said Medina. "I truly believe that the collective strengths of Verizon and Terremark will propel the company to even greater heights in the years to come."

Medina will be succeeded by Kerry Bailey, Group President of Enterprise Cloud Strategy and Services for Verizon. Bailey has held various executive positions within Verizon, most recently heading its "everything-as-a-service" enterprise solutions strategy.

“What initially attracted us to Terremark was not only its innovative services and top-tier facilities, but the impressive team of experienced and talented professionals that Manny was able to bring together,” said Bailey. “Terremark will drive Verizon’s global cloud and IT solutions strategy, and I’m looking forward to continuing our work to roll out an unmatched portfolio of secure, on-demand cloud computing solutions to be delivered through a unified enterprise IT platform.”

Medina founded Terremark with a vision for a data center that would make south Florida the gateway to Latin America for internet connectivity.  The company built The NAP of the America, one of the world's largest data centers, just as the dot-com boom was receding. The facility opened just prior to the Sept. 11 terrorist attacks, which further disrupted the economy.

Medina persisted, guiding Terremark  through a period of financial challenges as it sought to manage the debt from building the NAP. The company survived a brutal downturn in the data center market, and was transformed by two key strategic moves in 2007: the decision to build the NAP of the Capital Region, and the acquisition of Data Return and its Infinistructure platform. These two events laid the foundation for the company’s success in the government and cloud computing sectors.

The $85 million Data Return deal marked a huge bet on the future of virtualized platforms, which paid off in a huge way in the years that followed. "We believe that virtualization will be one of those watershed moments in our industry,” Medina said at the time of the transaction. "There is an insatiable appetite for computing capacity, and I believe virtualization is the best way to add computing capacity.”

In a 2008 interview with Data Center Knowledge, Medina reflected on his journey as Terremark's CEO through the difficult early years. “The industry was in crisis, but we were seeing the demand,” Medina recalled. “It was very difficult. Our philosophy was that if we fight for it long enough and survive, Wall Street would pay attention. We really believed the explosion of the Internet would catch up. It’s been an extremely gratifying turn of events.”