Airflow distribution problems play a significant role in increasing power consumption costs in a data center, and are primarily caused by underfloor airflow impedance, CRAC locations, and the distribution of cooling grates.

Today’s data center cooling infrastructure has many more demands placed on it than in the past. Server virtualization makes the computing model more efficient, but the added load in blade servers, combined with increased demands on storage and networking, has created an environment where high heat densities are forcing facilities managemers to review their cooling topologies.

The challenges are very well defined: servers require inlet air temperatures between 66°F and 77° F. The volume of cooling air required is approximately 160 cubic feet per minute (CFM) per kilowatt (kW) for rack-mount servers and 120 CFM per kW for blade servers. To accomplish this, the Computer Room Air Conditioner (CRAC) fan must move enough cool air to supply the server racks.

Simple as it seems, in reality it is very difficult to calculate whether there is sufficient underfloor pressure and airflow in a continuously evolving environment where heat densities vary from one rack to the next. In a heterogeneous computing environment, racks may house systems that range in heat density from 2 kW per rack to upwards of 35 kW per rack for high performance servers.

This variance can cause heat to build up as hot spots within the data center while the rest of the facility is over-cooled. By doing so, this “Meat Locker” effect increases the required cooling capacity upwards of two to three times the actual needed capacity – an inefficient, expensive cooling method.

Airflow impedance can be caused by a number of things: excess cables, misplaced pipes, odd layouts, and other underfloor obstructions that limit cool air distribution.

Distance is a Factor, Too

Impedance can also be a function of the underfloor distance that air has to travel: the greater the distance, the higher the potential that impedance will increase. Airflow impedance through a confined space, such as a server enclosure or data center underfloor, can be thought of in the same context as electrical impedance. Per Ohm’s Law: R = V/I, R is the resistance, V is the voltage, and I is the current forced through.

These equations show that in order to double airflow, there must be four times the fan pressure and eight times the pumping power consumed by the fans. But how? Fans reach a point of diminishing return when the cost of fan operation exceeds the savings.

Airflow takes the path of least resistance under the floor. The airflow reaching a server is decided by underfloor obstructions and CRAC performance. But servers take airflow all of the time depending on their cooling demands. So enough cool air must be pushed through to the server, or hot server exhaust will recirculate. These issues compound themselves when cooling an aisle of server racks. 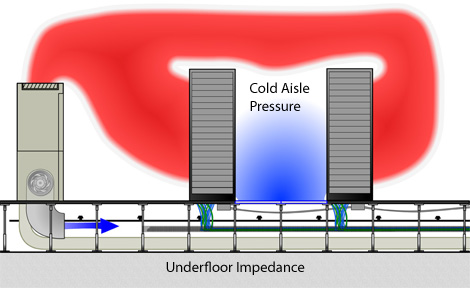 CRACs with variable-frequency drive (VFD) fans can help; however, they alone cannot achieve full cooling efficiency since they cannot independently vary airflow at multiple locations simultaneously. One approach to this is to manage underfloor airflow impedance, through the strategic use of Demand Based Cooling (DBC). DBC dynamically provisions data center cooling when needed in numerous areas simultaneously. It also adds real-time management and delivery of cooling to a changing data center environment.