As i/o ramps up production for its modular data center product, the company says it has a full pipeline of more than 100 orders. A significant chunk of those modules will be deployed at customer premises, rather than i/o's huge facilities in Phoenix and New Jersey. 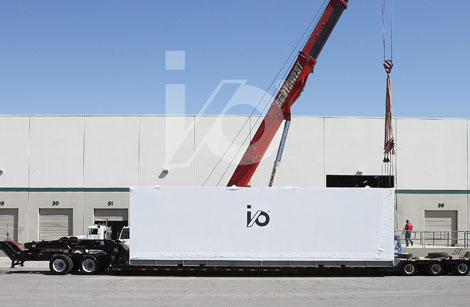 As data center specialist i/o ramps up production at its new factory in Phoenix, the company says it has a full pipeline of more than 100 orders for its i/o Anywhere modular data center product. A significant chunk of those modules will be deployed at customer premises, rather than i/o's huge facilities in Phoenix and New Jersey. Meanwhile, the company is scouting sites for another huge facility in Asia.

CEO George Slessman said that i/o has customer commitments for 112 of its i/o Anywhere units for delivery in 2011, including a single huge order. "We have 50 modules that will be deployed to a single customer between now and the end of the year," Slessman told Data Center Knowledge.

i/o Anywhere is a family of modular data center components that can create and deploy a fully-configured enterprise data center within 120 days.

Slessman was one of the keynote speakers at The Uptime Symposium this week in Santa Clara, Calif., where he laid out i/o's vision for the data center business to be transformed by standardization and modular deployment of factory-built components.

It's a strategy built upon two modes of deployment. In the first mode, modular units are housed in massive data centers built and managed by i/o, including a 540,000 square foot site in Phoenix and a new 831,000 square foot data center in a former New York Times printing plant in Edison, New Jersey.

i/o has begun installing customer modules in New Jersey for an anchor tenant, and planning to build the site out in phases. "We've got numerous customers signed up for New Jersey," Slessman said. "Sales activity has been very strong."

As it begins operating its first data center outside the Phoenix market, the company is looking for another site even further afield.

"Our board has authorized us to pursue an expansion in Asia in the first half of 2012," said Slessman, who indicated that the search is focusing on Singapore. "Customer demand is driving this. We have existing customers who want space there."

Even as it expands it facilities, i/o says it is also seeing strong interest in its second deployment model: shipping i/o Anywhere units to customer locations. Slessman said the customer appetite for modules at customer premises has exceeded his expectations.

"We underestimated the size of this market," he said. "The opportunity in front of us is immense."

Capturing the opportunity will require i/o make a successful transition into a manufacturing company. In February the company opened a factory for building its modular data centers. The 220,000 square foot facility recently entered production and delivered its first modules for the New Jersey site.

"Our first full production run was completed a week ago," said Slessman. "We're on pace to produce 120 modules by the end of the year." Slessman expects similar output in 2012, followed by an expansion of manufacturing capacity based on the company's expectation of growth in the market for modular data centers.

At Uptime, Slessman's keynote was just one of many presentations focusing on modular data centers. Schneider Electric announced a new push into the modular power and cooling market, while Cisco recently unveiled its IT container. As more industry players roll out modular strategies, skeptics remain.

Slessman said the day is coming when data centers can no longer be built as unique "snowflakes."

"We are at a precipice in terms of how we build data centers," he said in his Uptime keynote Tuesday afternoon. "Snowflakes are too expensive and take too long to deliver to meet the demands of this revolution. It's my belief that how we deliver data centers will change." 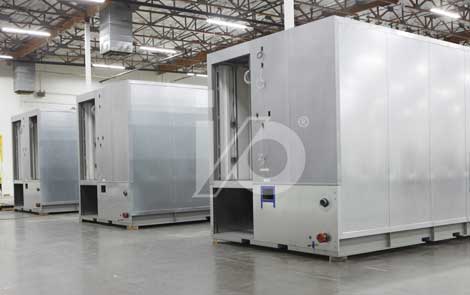