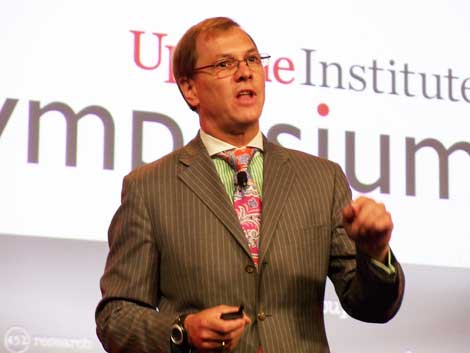 Schneider Electric is jumping into the modular movement with both feet. Today the company is introducing new modular power and cooling products, reflecting the growing momentum for standardized, factory-built equipment designs that promise faster and cheaper deployment of data center space.

Schneider doesn't view the market as tied to adoption of IT containers and  modules, either, according to Neil Rasmussen, the Vice President of Innovation at Schneider Electric.

"Modular power and cooling is suitable for every implementation, including traditional data centers, and will soon make other forms obsolete," Rasmussen said in his keynote at The Uptime Symposium in Santa Clara, Calif. "In five years you may still see some data centers built in the traditional way, but there will be a lot fewer of them."

Schneider's new offerings include a power module that can provide UPS support, and will join Schneider's cooling modules:

Portable power and chiller modules are already available from other vendors, including competitors like Emerson Network Power, Actve Power and MultiStack. But given Schneider's large customer base, the company's new focus on modular deployment is likely to further raise awareness of modular facility design.

"Most of the supply chain in the data center industry is continuing to support the old designs," said Rasmussen. "Modularity in and of itself is not a great benefit. But modularity is an enabler of standardization."

"This approach will have lower cost and better performance," said Rasmussen, who said the most effective use case may be in "overlays" that provide expansion power for existing data centers that have maxed out their utility power capacity. "These modular approaches are just as effective for indoor approaches and overlays."

Rasmussen noted that some in the industry will continue to insist that traditional brick-and-mortar designs can be just as effective as modular deployments, particularly in cost efficiency.

"If you're good, you can swim with an anvil around your neck, but there's an easier way," said Rasmussen.  "We believe this approcch is going to be a lot cheaper."