Solar Power in Data Centers: No Longer A Novelty?

Solar power hasn’t been widely used in data centers because it takes a very large installation of solar panels to make a dent in their energy requirements. But the month of April has seen the debut of four new data centers featuring on-site solar generation. 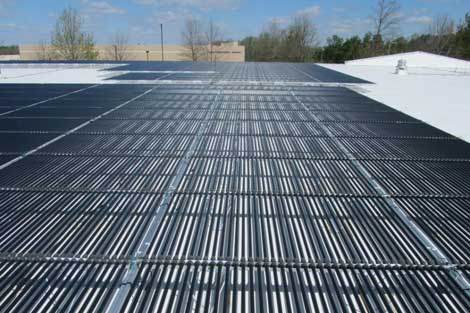 The solar panel array on the roof of the new DataScan Technologies data center in Alpharetta, Georgia.

Solar power hasn’t been widely used in data centers because it takes a very large installation of photovoltaic (PV) solar panels to produce even a fraction of the energy required by most data centers. But the month of April has seen the debut of four new data centers featuring on-site solar generation. In each case, the power from the solar array is being used either for office space or to make a modest reduction in the amount of power required from local utilities.

While the economics of solar power remain a challenge for large users, the recent flurry of on-site solar arrays suggest that data center operators are recognizing the value of these arrays as a symbol of the industry's commitment to sustainability.

The latest data center to go solar is DataScan Technologies, which this week opened a facility in Alpharetta,  Georgia. DataScan is a unit of JM Family Enterprises that specializes in accounting and risk management systems. DataScan says its solar array is the second-largest commercial location in Georgia, and will produce an estimated 285,500 kWh hours of electricity annually, reducing carbon emissions by 205 metric tons. The company says the solar power will reduce its data center’s energy consumption by 10 percent in 2011.

"By demonstrating our commitment to renewable energy and making sustainable choices a priority for our operations, we hope other companies will take similar actions and make a positive impact on our environment," said Colin Brown, JM Family’s president and CEO.

Here's a look at the three other new data centers that have unveiled solar installations this month:

Cisco Systems: The new Cisco data center in Allen, Texas has solar cells on the roof, which can generate 100 kilowatts of power for the office spaces in the building. The facility also captures rainwater for use in its irrigation systems, and is seeking LEED Gold certification.

BendBroadband Vault: This new facility in Bend, Oregon includes a solar array that can generate up to 152 kW of power, or about 18 percent of the expected power capacity of 900 kW for the first phase of the building. The Vault also purchases renewable energy credits through its utility, Pacific Power & Light, that offset the data center’s electricity use.

Facebook: The social network has installed a large array of solar panels at its new data center in Prineville, Oregon. The array can generate about 100 kilowatts of energy, with total expected production of 204,000 kilowatt hours a year. The solar power generated by the Prineville solar array will be used primarily to support the office areas and some mechanical rooms that are less power-intensive, but not the server rooms.