A Data Vault With a Green Complexion

The BendBroadband Vault is just 30 miles down the road from Facebook's huge new data center. But the 30,000 square foot facility, which opened its doors this week, is a data center with its own distinctive story to tell. 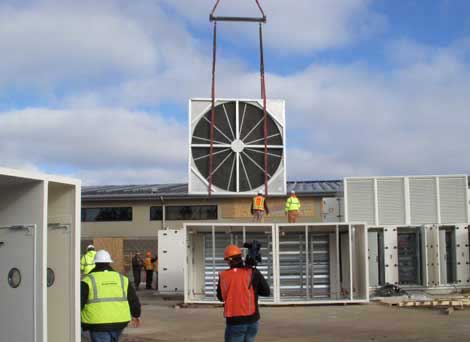 The BendBroadband Vault in Oregon installs a heat wheel (Kyoto Cooling) system to support the cooling system in its new data center in Bend.

Its located just 30 miles from a huge, extremely efficient Facebook data center whose debut triggered an avalanche of media coverage. But the BendBroadband Vault, which opened its doors this week, is a data center with its own distinctive story to tell.

BendBroadband has also shown an unusual commitment to industry certifications, gaining validation from The Uptime Institute as a Tier III data center, while pursuing a Gold-level certification under the LEED ( Leadership in Energy and Environmental Design) program for energy efficient building. The Vault also intends to gain acceptance as an Energy Star data center from the U.S. Environmental Protection Agency.

The Vault will offer colocation, disaster recovery and cloud computing services. BendBroadband has also partnered with Logicalis to offer a full host of dedicated managed services. The facility has two anchor tenants, including St. Charles Health System, based in Bend. BendBroadband, which provides data and transport services to the region’s commercial and residential customers, will also house key elements of its own Network Operating Center (NOC) at the facility.

"Our goal is to provide best-in-class colocation space and services to both small and large enterprises alike," said Leonard Weitman, VP Technical Operations at the Vault. "Our facility meets the highest security credentials and offers the power densities and peering opportunities demanded by businesses today."

The Vault's innovations include the use of a heat wheel, also known as a rotary heat exchanger or Kyoto Cooling. The heat wheel is a refinement of existing approaches that take advantage of outside air to improve cooling efficiency and reduce data center power bills. Rather than introducing fresh air directly into the server room, the heat wheel briefly mixes the outside air and exhaust air to creates an “air-to-air” heat exchanger.

The Vault appears to be the second U.S. data center to use the Kyoto Cooling concept, following the lead of the state of Montana, which uses a heat wheel system in a new facility in Helena. BendBroadband expects its system will be able to use fresh air cooling for about 75 percent of the year. The system has been in use for about a month now.

The data center is also supported by an array of solar panels solar array that can generate up to 152 kW of power, about 18 percent of the total 900 kW capacity of the first phase of the facility. The Vault also purchases electricity through PP&L's Blue Sky renewable power program, which purchases credits from facilities generating electricity from wind, solar and biomass.

PP&L's energy mix has drawn attention from Greenpeace, which criticized Facebook for locating its data center in Prineville, as PP&L currently generates the majority of its electricity from coal.  In the Blue Sky program, customers pay a premium for power but have their use offset by the renewable credits.