<img src="/sites/datacenterknowledge.com/files/wp-content/uploads/2011/04/greenpeace-reportcard-470.png" alt="" width="470" height="328" /> Greenpeace International this week broadened its focus on the environmental impact of data centers, releasing a report that profiles the energy usage of the facilities powering 10 major Internet services. The group called on the largest players in IT to disclose more information about the energy use in their data centers. 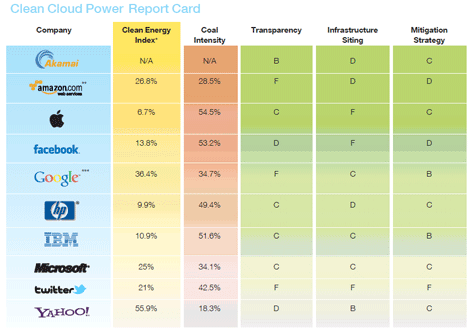 Greenpeace International this week broadened its focus on the environmental impact of data centers, releasing a report that profiles the energy usage of the facilities powering 10 major Internet services. The group called on the largest players in IT to disclose more information about the energy uses by their data centers, and place greater weight on renewable energy sources in making decisions about where to build new facilities.

The Greenpeace report, How Dirty is Your Data? (PDF),  includes a report card that rates the 10 companies for their "coal intensity" and use of clean energy. Yahoo fared best on both metrics, with the highest Clean Energy Index (55.9%) and lowest Coal Intensity (18.3%), boosted by its use of hydro-electric power in its data centers in Quincy, Washington and Lockport, N.Y. The company with the worst ratings in both metrics was Apple, which was penalized for its decision to locate its new data center in North Carolina, which Greenpeace singled out as a having some of "the dirtiest generation mixes in the U.S."

Apple was followed closely by Facebook, which has been the focus of a sustained Greenpeace social media campaign to "Unfriend Dirty Coal," and by the popular microblogging service Twitter.

"The technologies of the 21st century are still largely powered by the dirty coal power of the past, with over half of the companies rated herein relying on coal for between 50% and 80% of their energy needs," Greenpeace wrote. "Across the board, IT companies have thus far failed to commit to clean energy in the same way they are embracing energy efficiency, which is holding the sector back from being truly green.

"This approach can be understood in part by how the industry has defined the problem: power consumption. Thus the approach has been a strictly technical solution: improve server energy efficiency and reduce waste associated with cooling and other ‘noncomputing’ energy demands. What this approach fails to consider, however, is the kind of energy used to feed consumption."

Most renewable energy sources come with a premium price tag and have problems reaching the scale required to successfully support the power requirements of an entire data center. As a result, data center operators have looked to utilities to provide them with a power mix that includes more generation from renewable energy sources. But when it comes to site location, the cost of power and tax incentives have been much larger factors then availability of renewable energy.

Use of Nuclear Power at Issue

Greenpeace's ratings didn't only focus on renewables. The group also penalized companies whose power mix includes nuclear energy, which Greenpeace has opposed "because of its unacceptable risk to the environment and human health." The group says expansion of nuclear power should be halted, and calls for the shutdown of all existing nuclear power plants.

"We need to move off coal the fastest (for its environmental impact) and phase out nuclear power because of the risk it posses to communities," said Gary Cook, Climate & Energy Policy Analyst for Greenpeace's Cool IT campaign.

Cook said Greenpeace was frustrated by the refusal of many companies to disclose the amount of power used by their data centers, and discuss the mix of energy and use of renewables. The group compiled its own chart of major data centers for the 10 companies and estimates of the power used by each facility. Cook said each company was asked to provide data, and nearly all declined. When he shared Greenpeace's estimates, some companies said the data was incorrect, but declined to provide alternate data.

The Greenpeace report said that disclosure of energy use and sourcing will become more important as cloud computing grows in importance. "Just as we need to leverage IT energy solutions to help better manage our non-IT energy use, cloud consumers need information from the companies that manage their data in the cloud about the environmental and energy footprint of that data."

The group said IT energy transparency and reporting should include: