It was a breakout quarter for stocks of companies focusing on cloud computing, as a pair of acquisitions boosted several shares across the sector. The top five performers in our quarterly Data Center Investor roundup were cloud computing plays that saw their shares soar by 35 percent or more in the three-month period ending March 31.

It was a breakout quarter for stocks of companies focusing on cloud computing, as a pair of acquisitions boosted several shares across  the sector. The top five performers in our quarterly Data Center Investor roundup were cloud computing plays that saw their shares soar by 35 percent or more in the three-month period ending March 31.

The most direct beneficiaries of the cloud M&A trend were investors in Terremark (TMRK) and NaviSite (NAVI).  Terremark shares shot up 47 percent after Verizon Communications offered to buy the company for $1.4 billion, while NaviSite shares were 49 percent higher on the quarter following an acqusition offer from Time Warner Cable. Both stocks continue to trade as the companies work to close the deals.  Shares of Savvis (SVVS) and Rackspace (RAX) jumped in the wake of the deals, as investors speculated that other large companies may be searching for cloud computing acquisitions.

The growth of cloud computing is also boosting shares of companies that sell servers and storage to power these clouds. That was the case for SGI, which was the quarter's biggest winner with a gain of 127 percent.  Shares of SGI soared 25 percent in a single session in February after the company repoerted stronge-than-expected earnings and said it expects to be profitable in 2011. SGI's biggest customer is Amazon.com, which continues to buy servers to support the growth of its Amazon Web Services cloud computing platform. SGI said Amazon accounted for more than 10 percent of its revenue, meaning the company bought at least $17.5 million in servers and storage in the quarter.

Here's a look at the Data Center Investor chart for the first quarter: 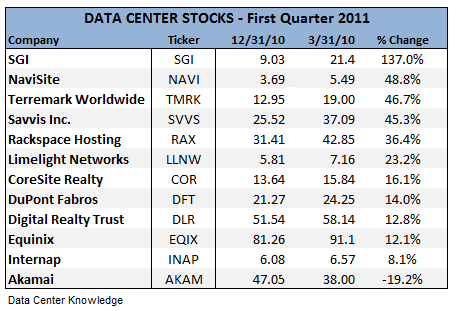 Every company in the sector except Akamai (AKAM) finished ahead of the broader market indices, as the Dow Industrials were up 6.7 percent, the S&P 500 gained 5.6 percent and NASDAQ Composite Index was ahead 4.7 percent.

The three public real estate investment trusts (REITs) focused on the data center had a solid quarter, with gains of 12 to 16 percent. The performance of content delivery networks (CDNs) was less consistent, as Limelight Networks (LLNW) was up 23 percent for the quarter, while shares of market bellwether Akamai Technologies (AKAM) slipped 18 percent as analysts were unimpressed with earnings.