Servers and networks will soon be considerably faster, enabling companies to crunch more data and improve application performance. That’s the view of Andy Bechtolsheim, who knows a few things about servers and networks 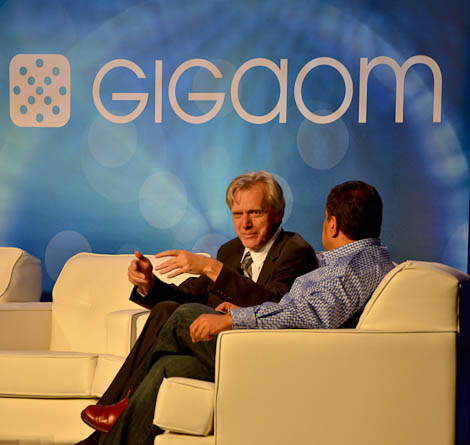 Andy Bechtolsheim, founder of Sun Microsystems and current Founder and CDO, Arista Networks, speaks with Om Malik about thinking about data on a bigger scale.

Servers and networks will soon be considerably faster, enabling companies to crunch more data and improve application performance. That’s the view of Andy Bechtolsheim, who knows a few things about servers and networks. Bechtolsheim was one of the founders of Sun Microsystems, and currently the chairman and chief development offer at Arista Networks, which builds switches for high-speed networking.

Bechtolsheim shared his perspective on the state of the data center Wednesday at the GigaOm Structure Big Data conference in New York. He sees the potential for substantial performance gains as solid-state flash drives are more widely adopted.

"The biggest architectural advance is flash," said Bechtolsheim. "It's a lot faster than hard disk drives. The amazing thing about flash is that it's extremely parallel. The scalability of flash isn't 1 to 10 times faster than disk. It can be 1,000 times faster. The real potential of flash hasn't been exploited yet. I think the time has come to think of flash as primary storage.

"In the next few years, we will see an amazing speed-up in I/O performance," he added. " Flash is on a performance curve that will drive the need for faster networks. The quality of results that can be served can be improved dramatically. This is where money comes from. The ability to translate data into quality results is key to any enterprise."

Why aren't more companies switching to flash? Cost is a key factor. After several years of rapid declines, the price of flash storage leveled off during the recession, and the debut of the iPad boosted demand. In recent weeks, the supply of flash has come into question, as several key vendors had their operations disrupted by the earthquake in northern Japan.

"The cost of flash has not gone down, and the earthquake in Japan hasn't helped,” said Bechtolsheim. “It's still much more expensive than disk drives.”

Some of the industry’s largest players have made big investments in flash. That includes Facebook, which is the biggest customer for flash vendor Fusion i/o.

Bechtolsheim believes the acceleration of IT infrastructure will also speed innovation.

“Building a good-sized cluster isn't that expensive anymore,” he said. “The capital required to start a company in this area has gone down considerably, and the ability to innovate in this space has grown proportionately.”

He cited open source software as a key ingredient in recent progress. “This level of democratization is coming along,” he said. “It's surprising how quickly some of these open source technologies take off, and offer tremendous benefit. The original promise of open source has exploded in ways I wouldn't have thought of 20 years ago.”

Bechtolsheim’s newest company, Arista Networks, is seeking to accelerate the network with switches optimized for 10 Gigabit Ethernet connectivity. Arista has a strong presence in the high-speed trading community on Wall Street.

“What we're seeing today, unfortunately, is that the network has become a bottleneck,” said Bechtolsheim. “If everything was connected with 10 Gig, one could access all the data in the cluster at compute speed. There's a business case to move to 10 gig networks, but it will really come into play next year. Our part here is to connect everything with 10 Gig and 40 Gig connectivity.”