This month, Amazon Web Services (AWS) turns five years old. As a leader in infrastructure as a service (IaaS), its impact can hardly be overestimated especially as an cloud enabler for SME‘s, new SaaS providers and, increasingly, an option for large companies that want to migrate infrastructure and services to the cloud.

In retrospect, it’s amazing to see the number of services that AWS has added to its portfolio in the past five years. The original offering that provides basic compute infrastructure and storage services has been expanded into additional compute products like Auto Scaling, networking products like Virtual Private Cloud and deployment tools like Beanstalk and, the latest, CloudFormation. In fact, these products have widened AWS’s approach into becoming a platform as a servce (PaaS) provider as well as an IaaS provider. AWS’s success can also be corroborated through demanding users like Netflix that run on AWS.

AWS revenues have been growing at a relatively steady rate both in North America and internationally and, according to Trefis Forecast, are expected to reach about $1.7 billion in 2011 and to pass $5 billion by 2017. Despite this immense revenue growth, same sources estimate that AWS is only accountable for about 3 percent of Amazon’s business and will remain limited compared to the online retailing business - which provides an interesting context for the success of the online retail business!

With its latest service, the CloudFormation, AWS continues to make it easier for businesses and developers to provision resources without worrying about sequencing and interdependencies. CloudFormation allows users to run templates based on JSON scripting language that include the description of resources and the order n which they should be activated.

AWS offers several pre-made templates that e.g. include “stacks” of resources like compute (EC2), auto scaling, elastic load balancing, storage (EBS, S3), etc. and describe the software packages that are automatically installed, e.g. LAMP (Linux, Apache, MySQL, PHP) and Wordpress. The primary benefit of CloudFormation is freeing users from determining how and in what order individual resources need to be provisioned. Apparently, the CloudFormation resulted in an offer for AWS customers after the Amazon's own developers started creating templates for internal usage - avoiding manually building and managing the dependencies between resources. The CloudFormation can be deployed either through a command-line interface using AWS developers tools or using the AWS GUI Management Console. 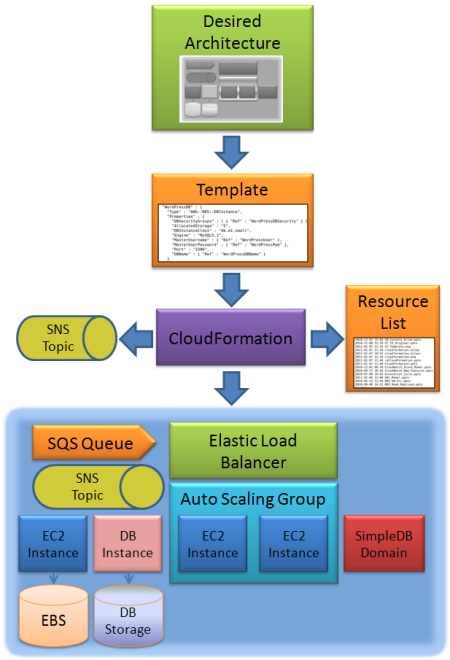 There is an excellent post by Jeff Barr describing the CloudFormation service in more detail at the AWS Blog.

Obviously it is very difficult to predict what new services AWS will be offering in the near future. It seems that a lot of its efforts are currently focused on its new availability zone or region, based in Tokyo, Japan. In fact, the AWS data center was launched only 10 days before the earthquake hit Japan with its tragic consequences. During March only, in addition to the new Tokyo Region, AWS has already announced support for Windows Server 2008, new internet access and virtual networking capabilities to its Virtual Private Cloud product, new identity and access management support for AWS CloudFront and new EC2 import connector for VMware vCenter. Considering the innovation pace at AWS there is perhaps no coincidence that it widely considered to be the leader in the cloud computing industry.