HP is Betting on the Cloud and WebOS

HP CEO Leo Apotheker announced this week that HP wants to provide the platform of choice for cloud services and connectivity and that HP will launch a public cloud offering in the near future. 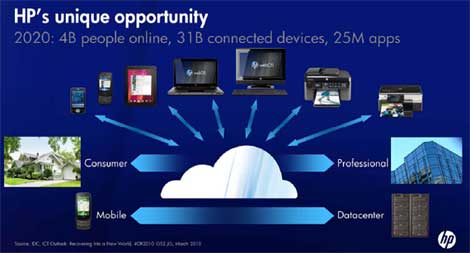 A slide from an HP presentation outlining its vision for cloud computing.

It's becoming increasingly clear that with last year’s purchase of smartphone maker Palm and its WebOS, HP is going to develop its own cloud offering. HP CEO Leo Apotheker announced this week that HP wants to provide the platform of choice for cloud services and connectivity and that HP will launch a public cloud offering in the near future.

Apotheker also says everything HP will do in the future will be delivered as a service. HP also intends to install WebOS on a variety of devices, not just smartphones like Palm did. PC’s and laptops  will have WebOS pre-installed and be able to run Windows as well. Apparently, to realize this vision, HP will perform a number of strategic acquisitions of innovative software and cloud-based service providers.

To support its cloud endeavors, HP plans to establish an application store for enterprise customers and consumers. The app store will not just be mobile specific, like most other current app stores like Apple App Store and Android Market, but targeted at a wider range of devices. "We will build an open marketplace," said Apotheker speaking at HP’s analyst summit.

Considering Apotheker's background as a former executive at SAP, it should not come as a surprise that HP aims to partner with large transactional systems like SAP and Oracle, with a special focus on analytics. In large, HP’s cloud vision seems to be focusing on business analytics and business intelligence that require “big data” and that have heavy processing requirements. It’s a very significant change in HP’s vision, moving away from focusing on PCs, printers and hardware in general to the cloud, connectivity, security and services.

Clearly, HP plans to capitalize on current hardware strengths and legacy – looking at platform services and hybrid infrastructure. HP enterprise customers will most likely be advised to expand their current infrastructure into the cloud, presumably HP’s cloud, creating a sort of a hybrid cloud environment with secure connection between, e.g. VPN and MPLS. Furthermore, HP also plans to establish a public cloud for e.g. Greenfield and those preferring migrating entire applications and services to the cloud and leverage lower costs.

By pre-installing the WebOS on HP devices, they will be ready to utilize HP cloud services directly creating a large ecosystem for HP customers. And, HP does not plan on competing directly with other OSs like Windows but rather to run in parallel. WebOS might also be able to run alongside Android on smartphones for example, giving user’s the choice of switching between platforms, although it remains to be seen how and if users are willing to do that.

HP's strategy seems to require customers wanting to utilize the HP cloud to use an HP device running WebOS. This is a somewhat limiting strategy - unless users can install WebOS on other devices as well. Also, it’s unlikely that customers interested in deploying the cloud will be forced to purchase certain HP devices – but rather wanting to avoid a potential vendor lock-in situation. Furthermore, running parallel OSes on the same device may also have its flaws, especially when it comes to handheld devices.

Although an increasingly successful implementation in virtualized data center infrastructure, smartphone and tablet users are less likely to accept running two or more OSes and, it appears even more unlikely that WebOS, although a powerful OS, is going to quickly replace successful mobile platforms like the iPhone, Android and WP7. Having said this, it is going to be especially interesting to monitor HP’s progress and cloud endeavors.