NASDAQ Steps Up Its Game in the Data Center

Electronic trading pioneer Nasdaq OMX Group has had to step up its game amid the emergence of new rivals and a flurry of industry consolidation. Nasdaq's response: The boardroom mulls a hostile bid for NYSE Euronext, while the IT staff drives faster feeds and speeds in the data center. 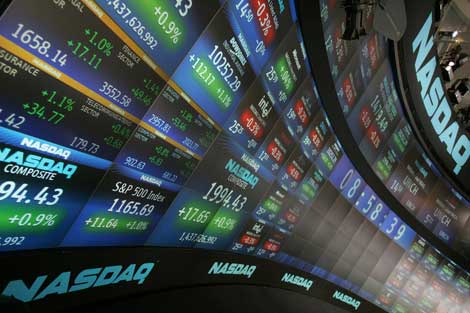 As a pioneer in electronic trading, Nasdaq OMX Group has been a technology leader as U.S. stock exchange action has shifted from bourse floors to data centers. The  explosive growth of high frequency trading has now sparked a technology arms race on Wall Street, in which technology platforms have become the crown jewels in a flurry of mergers and acquisitions. As trading titans seek to assemble global platforms, Nasdaq is working on several fronts to retain a leadership position.

In the boardroom, Nasdaq is contemplating a hostile takeover bid for NYSE Euronext, according to reports this morning in the New York Times and Wall Street Journal.  The bid is aimed at averting a planned merger between the NYSE and Deutsche Borse that would merge leading U.S. and European platforms. According to reports,  the bid would rely upon Nasdaq OMX's ability to borrow $5 billion and work out a deal with InterContinental Exchange (ICE) to buy some NYSE Euronext assets.

In the data center, Nasdaq has been constantly working to provide technology to support faster and cheaper trades for the hedge funds and traders using its high speed trading platform, according to Robert Waghorne, Senior Vice President of European Markets Technology at NASDAQ OMX Group, who discussed the company's  operations last week at the DataCenterDynamics New York conference.

Technology as the Core Business Engine

"We really are a technology company," said Waghorne. "It’s the core engine for all of our business. We can trade anything, anywhere on the planet."

In addition to its familiar NASDAQ electronic exchange in the U.S., the company's technology and software powers 70 exchanges in 50 countries around the world, including everything from electricity markets in the UK to stock exchanges in Australia.

In the U.S. Waghorne says the Nasdaq platform can handle more than 1 million messages a second at an average speed under 100 microseconds. "The exchanges need to be as fast as possible," said Waghorne. "It’s a baseline to be in this industry."

The need for speed is a key element in the growth of high speed trading, in which traders use algorithms to identify and capture opportunities for profitable trades. This approach relies upon speed in both directions - obtaining price information and executing trades. The growth of competing electronic platforms and exchanges has placed a premium on transaction cost as well as execution speed.

"The cost pressures on exchanges are enormous, so we need to be hyper-efficient," said Waghorne. "The (transaction) costs that customers are expecting are decreasing, so you need massive scale to make this work. This is what is driving consolidation in the industry. Technology is a major factor in exchange consolidation."

In seeking to reduce transaction costs, Nasdaq has looked to its IT department to deliver savings. "Data center consolidation and platform consolidation has been central for us," said Waghorne. "We’ve definitely been pushing into multi-core (processors and servers), and we’ve made some significant moves with virtualization that have driven cost reductions.We have reduced technology costs 40 percent from 2006 to 2010 while increasing capacity. In 2006, it took about a millisecond to conduct a transaction. Now it’s under 100 microseconds."

That has made Nasdaq's data centers an appealing environment for proximity trading, "We have been a pioneer in offering colocation services allowing our users to put servers in our data centers," said Waghorne. "Not only are we selling the data center space, but we’re now offering a more significant suite of tools. It’s a growth area for us."