Data Center Energy Efficiency Guide: In developing a plan to improve the energy efficiency of your data center, the first step is to gain an understanding of the current conditions. Here are tips on simple fixes to common problems that can provide short-term improvement without huge expense. 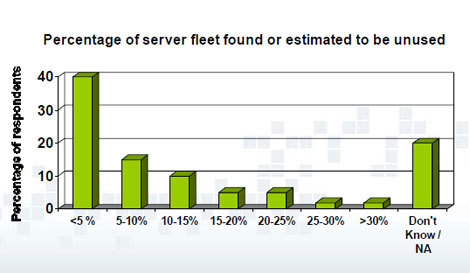 In developing a plan to improve the energy efficiency of your data center, the first step is to gain an understanding of the current conditions. Where are you doing well? What areas need improvement? And perhaps most importantly, where are the "low-hanging fruit" - the simple fixes to common problems that can provide short-term improvement without huge expense. So we start our journey with some guidelines on assessing your data center, and addressing quick fixes.

Turn Off Unused Servers
A surprising amount of energy can be saved simply by turning off unused servers. You might think every server in a data center is tightly managed. You'd be wrong.  These "vampire"servers continue to live on and consume energy.

A 2010 survey (PDF) conducted by The Green Grid found that nearly a third of participants - who presumably would be among the most efficiency-conscious operators - have not attempted o discover whether they have servers that are unused.Of the companies that  have investigated, 35 percent found that between 5 and 25 percent of their servers were not being used.

The Green Grid estimates that the average cost of powering a server for a year is $250. Thus, a data center with 5,000 servers and 5 percent idle would be spending $62,500 for energy to power servers that are doing nothing. Then there's the hardware savings of using fewer servers. "Ultimately, finding unusued servers could avoid the cost of a new data center," The Green Grid concluded. "Even a small percentage of servers is an expensive problem to ignore."

So how do you deal with unused servers? In a 2007 study, two major computer manufacturers found 500 servers with no know function.  The systems were turned off and kept in place for 90 days. If someone came forward to claim a server, it was put back into service. If no complaints emerged after a quarter, the servers were removed. Once the process is complete, implement a repeatable mechanism to identify unused servers.

Plug the Leaks
Managing the airflow and air pressure are key steps in improving the energy efficiency of your data center. When you'r epaying to cool the air, you want to ensure that the coolr air reaches the servers and does its work. Many data centers fail to take simple steps to eliminate "leaks" in the pathway between your computer room air conditioners (CRACs) or air handlers (CRAHs) and the racks containing your servers. There are a number of areas along this route where blockages, gaps and recirculation can diminish air pressure and temperature, making your mechanical systems work harder to cool the space. Here's a list of tips from the Energy Star program at the U.S. Environmental Protection Agency:

Next Up: Processors and Servers