<img src="/sites/datacenterknowledge.com/files/wp-content/uploads/2011/02/labs-panel-2.jpg" width="470" height="245" /> As America's largest companies begin to get a handle on their data center energy usage, they're widening their gaze to scrutinize the efficiency of their engineering labs. 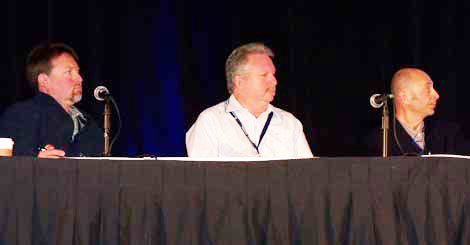 A panel on engineering labs at the Technology Convergence Conference featured Mike Honer from Juniper Networks, Chris Doland from Cisco Systems and Val Sokolov from Brocade.

As America's largest companies begin to get a handle on their data center energy usage, they're widening their gaze to scrutinize the efficiency of their engineering labs. Managers of some of the leading lab operations in Silicon Valley say the attention is long overdue, and will lead to significant energy savings.

"One of my challenges is to carry the message that the lab is just as much a production environment is the data center, and should be treated as such," said Val Sokolov, Senior Manager for Engineering Lab Services at Brocade Communications. "It's not adequately understood up the channel."

An Area of Opportunity

"The lab space is an area of opportunity," said Mark Honer, Service Manager, Customer Service Labs at Juniper Networks. "It's coming into its own."

Sokolov and Honer discussed energy efficiency in labs, along with Cisco Systems Lab Manager Chris Noland, at last week's Technology Convergence Conference in Santa Clara, Calif. Session moderator Mark Thiele of ServiceMesh jokingly noted that the panel featured speakers from Cisco, Brocade and Jumiper at the same table - "and no one's strangling anyone."

But the opportunities for energy savings are serious business. "Labs can constitute a major portion of your IT spend," said Thiele, but tend to get scant attention from industry groups.

One possible reason: labs can be a more unruly environment than the data center, with disparate projects sharing space. "You have a massive amount of projects," said Brocade's Sokolov, which placse a premium on tracking and managing the equipment for each team as project cycles spin up and down.

Honer said that while a data center is supported by a staff of 20 to 30, laboratory environments can be used by 200 or 300 people at a time.

Having multiple project teams sharing space also mandates a focus on labeling and standardization. "You've never been in a more frustrating meeting than talking about what color cabling to use," said Honer. "But when you move from lab to lab, you're going to have problems without standardization."

Labs are also often housed in legacy facilities rather than cutting edge data center space. "We've got labs that are designed around 35 watts per square foot in apps that want 500 watts per square foot," said Honer.  "Five years or 10 years ago, you wouldn't have predicted. You have to constantly recycle and upgrade your labs to keep up with technology."

"We've had everything from 35 watts a square-foot with cold air blowing everywhere right up to hot and cold aisle environments with curtains for containment," said Cisco's Noland.

'People Have Woken Up'

"In the last year or so, people have woken up and seen the  lab as a strategic part of the company," said Jupiter's Honer. "This is a continuous evolution."