LTE in the Spotlight at Mobile World Congress

Much of the spotlight at Mobile World Congressfocused on future mobile broadband technologies. One trend worth watching is the development of mobile broadband networks, particularly the 4G Long-Term-Evolution (LTE) technology. 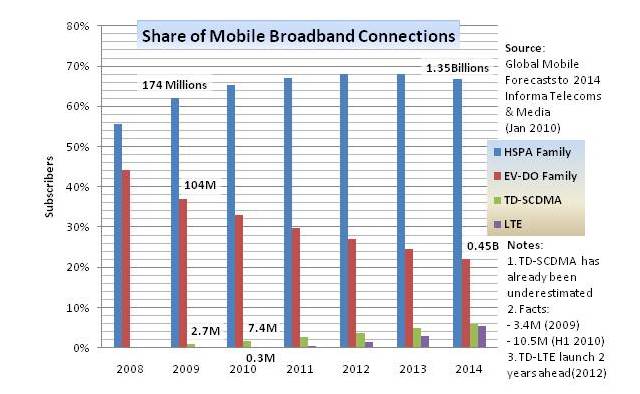 At the Mobile World Congress (MWC) in Barcelona last week, most of the leading service providers gathered to give their view of contemporary and future technologies and trends. Much of the spotlight at MWC focused on future mobile broadband technologies, as well as the shift in focus from smartphone devices to smartphone platforms and ecosystems. One trend worth watching is the development of mobile broadband networks, particularly the 4G Long-Term-Evolution (LTE) technology.

A few mobile network operators (MNOs)have started to deploy and offer access to next generation mobile broadband networks, usually either LTE or WiMAX. Although both are great technologies, most agree that LTE will prevail as the 4G networking technology - especially after operators like AT&T and Verizon committed to LTE, taking much of the momentum away from WiMAX.

LTE is a direct evolution of 3G technologies, being driven by 3GPP who produced the 3G specification and in partnership with ETSI. In the US, LTE early adopters include MNOs like Verizon, which offer LTE in certain markets and airports and plans to offer nationwide coverage by 2013. Similarly, AT&T plans to begin deploying LTE by mid-2011 and to have more or less nationwide coverage by 2013.

In Europe, the situation is similar. A few MNOs, including TeliaSonera in Scandinavia, have started deploying LTE in certain well-defined markets and a host of others are planning their rollout in the coming months. Asian MNOs like NTT DoCoMo and China Mobile have either already started LTE deployment or have definitive plans for LTE deployment in 2011.

However, the primary usage scenarios are restricted to mobile modems/dongles for PC and laptop connectivity, as few handset devices currently support LTE speeds and networking standards. All this is about to change, as many new LTE handsets will emerge later this year with HTC Thunderbolt expected to be the first handset allowing simultaneous voice and data use on the LTE network.

Google CEO Eric Schmidt believes the rollout of LTE networks and new cloud based services this year will mark the start of a new era of mobile innovation, where LTE will be the enabler. Schmidt points out that developers today start by looking into the mobile segment, because of its scale and growth. Smartphones have already surpassed PC and laptop sales and are increasingly becoming the platform of choice, together with tablets, for gaming, social networking, apps and so on.

Schmidt said the adoption of LTE will bring users a totally new type of mobile reality through interactive and 3D apps, augmented reality, e-health, and intelligent location based services, to give an example. Another interesting example is the translation of languages using the smartphone – immediately translating a user‘s speech into another language of choice and vice versa. The actual language translation would typically be taking place in the cloud.

Several other executives expressed similar views of the future, especially in the light of the forecasted mobile data growth explosion.

Despite all the enthusiasm at MWC, LTE is expected to account for only about 4 percent of the world’s mobile connections in 2015, according to a recent report by Wireless Intelligence. This accounts for about 300 million users,  with the majority in Asian countries. Although the percentage may not represent a high proportion of total global subscribers, it will be, to a large degree, confined to mature mobile markets with the fastest rates of smartphone and tablet adoption. Therefore, the impact of LTE should not be undermined and will certainly bring many interesting and unforeseen services and applications and, perhaps, bring transformation to the mobile world.