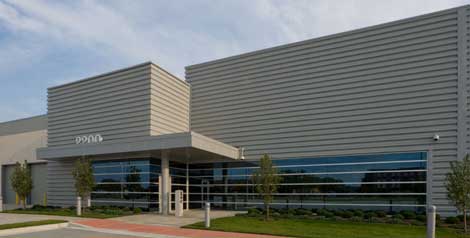 On TuesdayDuPont Fabros (DFT) reported that it has signed leases or pre-leases in recent weeks for 53,500 square feet of space (about 9.75 megawatts of critical load) in the second phases of data centers in Chicago and northern Virginia. The real estate investment trust (REIT) didn't identify any of the customers in the new leases, other than to confirm that all were existing tenants in the first phase of those facilities.

But Data Center Knowledge has learned that colocation provider ServerCentral and cloud hosting specialist Rackspace Hosting are the customers that have pre-leased space in the planned Phase II of DuPont's CH1 facility in Elk Grove, Illinois. Between them, the two companies have reserved 5.2 megawatts of critical load.

In northern Virginia, DuPont Fabros said it had filled phase II of its ACC5 data center in Ashburn, Virginia with 4.55 megawatts of new leases. The tenants were described as an Internet company and a gaming company. Current tenants in ACC5 Phase I fitting those descriptions include Facebook and Zynga, whose games are enormously popular on major social networks. Facebook has leased additional space over the past quarter, vaulting past Microsoft to become DFT's second-largest tenant after Yahoo.

DuPont Fabros President and CEO Hossein Fateh said the recent activity reinforces the success of  the company's approach to its data center construction and leasing. DFT typically constructs an 1,100-foot long shell for its data centers and builds out half the space, allowing it to use a phased construction scheme and retain the opportunity for rapid deployment of the second phase.

"One of the benefits of our phased approach is that when our tenants' requirements increase, they are able to take additional space in the second phases of our data centers," said Fateh. "This approach reduces their risk exposure and capital expenditures. This leverages DFT's platform and building design.

"The benefit to DFT is that our first phase serves as an incubator for our second phase. Many existing tenants in Virginia have taken additional space on our Ashburn campus. We are seeing this trend repeat itself in Chicago. For us, the second phases of each project have always been a low-hanging fruit."

Progress in Chicago
Fateh said that the company's home base of northern Virginia remains its strongest leasing market. But after a slow start, the CH1 facility in Elk Grove Village has gained momentum, with the rapid growth of Rackspace and ServerCentral helping DFT fill the huge 470,000 square foot facility. DuPont Fabros has not yet begun construction on the second phase of CH1, but has now leased 29 percent of the space.

"In Chicago, there's a huge lack of supply," said Fateh. "It's a very tight market, and a very good market for us."

DuPont Fabros said it expects to open Phase II of CH1 in the first quarter of 2012, and expects to arrange $100 million to $125 million in financing for the project in the near future.

In a conference call with investors and analysts Wednesday, DuPont Fabros executives expressed optimism about the company's expansion into Silicon Valley with a large new data center in Santa Clara, Calif.

We expect Santa Clara to be our second best market after Virginia," said Fateh. "We believe many of our existing Virginia tenants will also be interested in our Santa Clara data centers." DuPont Fabros is projecting that it will take about 18 months to lease up the first phase of the Santa Clara project, named SC1.

Fateh said he doesn't see any risks from the mergers sweeping the cloud computing sector in the wake of Verizon's offer to acquire Terremark for $1.4 billion. "We are one of the top providers of data center space to cloud providers," said Fateh. "We're the landlords for the cloud. I think it makes absolute sense for Verizon. I think you will see more large companies buying providers for their cloud platforms. We think we're going to see more and more consolidation."