DuPont Fabros Technology (DFT) will be the first real estate investment trust in the data center sector to report its fourth quarter results, which are expected after the close of the market today. Here's a preview.

DuPont Fabros Technology (DFT) will be the first real estate investment trust (REIT) in the data center sector to report its fourth quarter results, which are expected after the close of the market today (Tuesday, February 8}.  An average of analysts expectations tracks to revenues of $ 69.1 million, and a profit of $ 0.16 per share, while the company's guidance projects a profit of $ 0.09 to $ 0.12 per share. According to consensus, the expected revenues growth would exceed 30% on a yearly basis, as the company reported $ 52.7 million in Q4 2009.

DFT has basically no contracts due for renewal in the fourth quarter, and only 1 percent of its annualized base rent is set to expire in 2011. Given the fact that less than 10 percent of revenues will come for renewal by 2013, churn will not really be an issue to worry about for a while, as seen in this chart (click to enlarge).

The company has several projects due for completion in 2001, and for this reason analysts see the company growing at a very healthy rate (more than 20 percent) even in 2011.

With no debt maturities due until 2014, Dupont Fabros should have sufficient flexibility to finance these additional projects.
Here is a list of the development projects that DFT might be pursuing in the next few years (click for larger version): 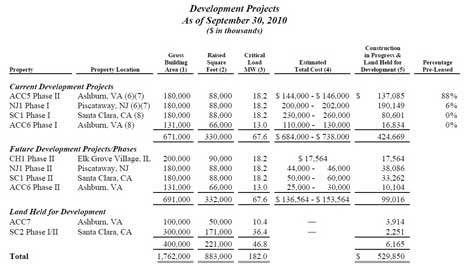 The market for wholesale data center seems to remain quite healthy, in spite of additional supply becoming available in the next few years.

In certain locations, like New York metro, Dupont Fabros started offering customers the possibility to lease data centers with as little as 0.5 MW (500 kilowatts) of power, approaching a market that was usually held by multi-tenant colo companies like Equinix, etc. This flexibility is certainly a positive for wholesale REITs, as it gives them the opportunity to fulfill the need for smaller additional locations of some of their customers, and to approach completely different verticals, like banks an financial services, that were previously relying on other data center suppliers.

Paolo Gorgo writes about the colocation and CDN sector at Nortia Research and Seeking Alpha.