Corporations have tried unsuccessfully to ditch tape in favor of other media for years. The arguments for replacing tape with SAN are compelling, but tape has two significant advantages over other media: cost and portability. 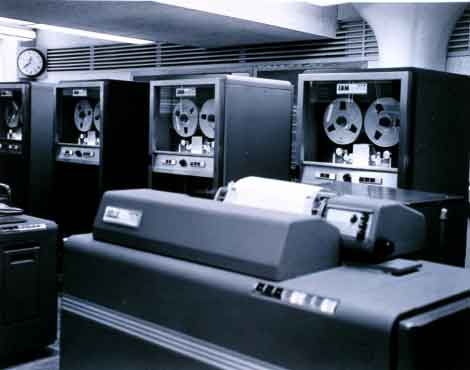 Back in the day...Despite what people may assume, tape storage backups still remain in use today. Image Source: NOAA

It's time to toss tape in favor of SAN for reliable backup and restore solutions. Don't forget to update your resume on your way out to the dumpster with those tapes. Right?

There's a lot of buzz these days surrounding the idea that SAN is inexpensive enough to use for backups, obviating the need for those clunky old tape libraries, changing out thousands of tapes per week, hiring staff to manage tape media and transporting tapes to an offsite storage facility. Wouldn't it be wonderful to rid yourself of the expense and hassle of all that tape? It would, if it were possible. But, it isn't.

The arguments for replacing tape with SAN are compelling. SAN is fast, prices are dropping, and it is a reliable media type. However, there is one ingredient conspicuously missing from the list: Standard SAN disks aren't removable. The non-portable nature of SAN disks make it impossible to comply with offsite copy requirements. The requirement for offsite backups stems from practices outlined in the "Data Protection" sections of The Sarbanes-Oxley Act (SOX), The Health Insurance Portability and Accountability Act (HIPPA), and others. Offsite backups are nothing new and have been part of backup strategies since the early days of mainframe computing.

Why Tape is Still Prevalent

Corporations have tried unsuccessfully to ditch tape in favor of other media for years. Optical media was the tape killer of the 1990s but its limited size and somewhat unreliable recovery statistics made it useful only on a small scale.

So, what is the answer for companies that want to ditch traditional tape in favor of disk media for backups? The short answer is that you can't ditch it, at least not at the enterprise level. And, you can be sure that no data center manager responsible for providing backup and restore services to customers, would ever go out on an untested limb to replace tape.

The long answer is that it is possible, though considerably more expensive, to remove tape from your life. Current technology leverages disk space to which data is moved via a Virtual Tape Library (VTL). VTLs are cost-effective because your current backup software uses the VTL as if it were a physical tape library. They're also efficient because data is moved to them in blocks instead of streams. Then, once your backup to the VTL completes, it's offloaded to tape, and backup personnel move the tapes to an offsite location.

Removing tape from the equation involves the use of removable disk media. Portability is a requirement for moving backup media to an offsite location. Fortunately, there is such a hard disk type available for this: SATA. SATA, by definition, is hot-swappable. SATA drives are also inexpensive, though not as inexpensive as tape, they feature high capacities (40GB to 3TB), low cost ($0.05 to $0.07/GB), fast data transfer rates (300Mbps), block transfers, and are very durable.

The major downsides to using these cheap, hot-swappable, full-sized (3.5") disks is weight (1.4lbs or 636g each), data center power requirements, and heat generation.

If you're thinking that solid state drives (SSDs) are a viable alternative, think again. While SSDs aren't as weighty (2.5oz or 77g) and don't generate the heat or gulp power like spinning drives, their price is overwhelming (~$2/GB) and sizes don't measure up (8GB to 160GB).

Your takeaway for today is that the ancient art of tape management is here to stay for a while longer. How long? Until disk storage prices fall to an affordable level on a large scale. Yes, you're stuck with tape for now, but as long as you are, your bottom line, your tape, and your face will never be red.

Ken Hess is a technical analyst, author, and consultant. You can see his work at KenHess.com