Oh boy. Jim Cramer's talking about data center stocks again. In the wake of last week's selloff in shares of networking and cloud computing stocks, the host of CNBC's "Mad Money" told investors to unload shares of colocation provider Equinx (EQIX). "I would be a seller of EQIX because I don't think the data centers, the physical space, is going to grow the way people think," Cramer opined during the "Lightning Round" segment of his show last Thursday (link via Paolo Gorgo).

For all those investors that followed Cramer's "sell, sell, sell" recommendation, here's what you missed: 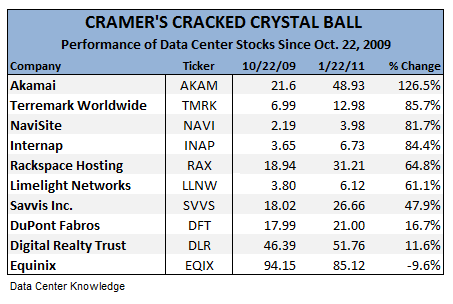 It can be argued that Cramer was right so far as Equinix is concerned, as his early sell call averted the 25 percent plunge in October after the company lowered its guidance. Alas, selling a year earlier would also have missed several opportunities to sell above $106 a share.

But selling the whole industry, as Cramer advised? You'd have missed some great gains and major success stories. That includes cloud computing success stories like  like Terremark (TMRK) and Rackspace (RAX) and turnaround stories at  Internap (INAP) and NaviSite (NAVI) and content delivery plays like Akamai (AKAM) and Limelight Networks (LLNW).

Flawed Logic
My beef with Cramer is that his 2009 "sell, sell, sell" call was based on flawed logic (processor advances will empty data centers) rather than an informed opinion on supply and demand for colocation services. Like many tech investments, companies in the data center sector have often been volatile, with both gains and losses in industry bellwethers exceeding the broader market as trends shift.

That's prompted valuation concerns about high-fliers like Equinix. Prior to last week's selloff, there were plenty of investors and analysts who felt F5 Networks (FFIV) and Riverbed (RVBD) were ripe for declines after many months of steady gains.

Cramer is an entertaining guy, and there are sectors of the market on which he has legitimate insight. Data centers, alas, have not been one of them.