Microsoft is ready to move ahead with its delayed $200 million data center project in West Des Moines, Iowa. The project was first announced back in the summer of 2008 but halted when Microsoft trimmed capital spending. 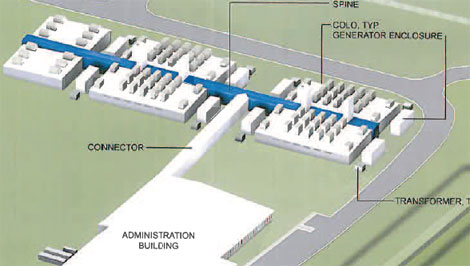 An illustration of the Microsoft data center planned for West Des Moines, Iowa.

Now that Microsoft has unveiled its new data center in Washington state, the company is ready to move ahead with its long-delayed project in West Des Moines, Iowa. The project was first announced back in the summer of 2008, when enthusiasm for new data centers in Iowa was high in the wake of Google's announcement of a new facility in Council Bluffs.

Last month Microsoft received final approval to begin construction on the data center, which will add 75 new permanent jobs. The project will be supported by almost $8 million in city spending on road improvements and a water main from a nearby street.  The city's cost is being covered in part by a $3.4 million grant from the state's Reinvesting in Iowa's Sound Economy program. With an estimated $200 million investment from Microsoft, the city will require the company to complete construction by December 2012 and accept a minimum property assessment of $15 million.

Now that dirt is moving in West Des Moines, we'll start to see how Microsoft will implement its modular data center strategy for the Iowa climate. Last week Microsoft shared details of the second phase of its Quincy, Washington data center campus, which features an updated design based on the company's use of modular pre-assembled components (PACs).

But Kevin Timmons, General Manager for Datacenter Services for Microsoft, said the modular  design will vary at each new facility. "We’re continually evolving," Timmons told Data Center Knowledge. "The one thing they’ll all have in common is the modular aspect, but the design will differ by location. We really optimize for each local environment."

Plans for Nearby Development
The 41.8 acre site (search parcel 16-23-351-001 on this site) sits out on its own for now, but the city has grand plans for future neighbors.  In June 2010 the Iowa Department of Economic Development granted a $500,000 award to the city of West Des Moines toward a $10 million project to provide power and infrastructure improvements to the Grand Technology Gateway of West Des Moines. Just over the hill from Microsoft is a new DMACC (Des Moines Area Community College) campus.  Microsoft listed DMACC and Iowa State University as strong benefits in overall site selection for Iowa.

Here is a picture taken just up the road from the Microsoft West Des Moines site. Notice the electrical substation off to the right.

Here's a review of the timeline for the West Des Moines project, as tracked by Data Center Knowledge:

While the Microsoft project has been a while coming, it's a welcome arrival for Iowa, which has emerged as a focal point for data center development in the midwest. Here's a look at some of the state's news-making data center projects: