How the Cloud is Driving Profits at Rackspace 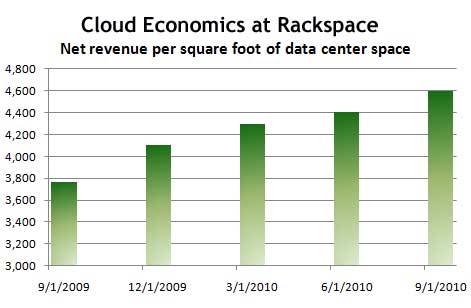 A chart of revenue per square foot for Rackspace data centers

Cloud computing has many benefits for end users. But can it make data center providers more profitable? Financial metrics show that the growing cloud computing operation at Rackspace Hosting is helping the company deliver  more revenue from its data centers.

Over the past year, Rackspace (RAX) has added 38,000 customers, nearly all of them in its fast-growing cloud hosting business. During that time, Rackspace has seen the average revenue for each square foot of finished data center space increase from $3,764 to $4,602 - an improvement of 22 percent. That explains how Rackspace was able to boost its quarterly revenue by 23 percent (from $459 million to $565 million) without spending tons of cash to expand its data center facilities.

Different Economics for Cloud Computing
The data validates Rackspace's belief that cloud computing can be more profitable than the company's managed hosting business. The two approaches to hosting have very different economics - managed hosting is a premium service used primarily by enterprise customers, while cloud computing is an affordably-priced service with major traction in the small business market.

So how can cloud computing be more profitable? It all comes down to utilization - how efficiently the provider can use its server hardware and data center space.

This is where the Rackspace data is  useful. The San Antonio hosting provider has been the best source for data on cloud economics for providers, due to its thorough disclosure of financial and operational metrics in its quarterly earnings reports.

Metrics for Cloud Financial Performance
This has allowed us to analyze the company's performance on average revenue per user (ARPU) and revenue per server as the company has made the transition from a managed hosting specialist to a cloud provider. The thousands of new cloud computing customers each pay a tiny fraction of the revenue Rackspace receives from a single customer in its managed hosting business. In terms of ARPU, a common metric for hosting performance, the managed hosting business looks much more attractive.

But Rackspace says it can get extra mileage from its infrastructure from improved utilization – the ability to pack more customers onto each server in a cloud platform  – as well as an extended lifespan as retired servers from the managed hosting business are incorporated into cloud computing clusters with higher fault tolerance.

That has been borne out by an upward trend in revenue per server, which Rackspace sees as a key metric for its business progress. The revenue-per-square-foot data provides an even broader view of the operational benefits of cloud computing:

None of these trends will be a surprise to folks operating large platforms for single applications. Companies like Microsoft, Google and Facebook have custom-engineered their data centers around the requirements of their apps. But the Rackspace data offers insight into the potential cloud benefits for hosting companies, who currently must support customers with a wide variety of requirements. Many of these hosting providers are charting a path to the cloud.