Netcraft says the number of web servers based in Ireland has soared since Amazon opened an EC2 data center in Dublin, illustrating how cloud computing is making it easier for companies to extend their reach internationally. 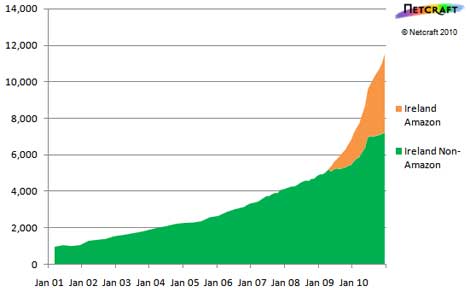 The team at Netcraft has been doing an exceptional job tracking the twists and turns in the Wikileaks hosting controversies and subsequent electronic attacks. But sandwiched in between those stories, the UK-based Intenet research firm had an interesting item on the growth of Amazon. Netcraft charts how the number of web servers based in Ireland has soared since Amazon opened a data center in Dublin in December of 2008 to house the European availablity zones for its EC2 cloud computing services.

"Amazon's cloud hosting now makes up more than a third of all internet-facing web servers in Ireland, with three times more web servers hosted than the next largest hosting location," writes Netcraft's Colin Phipps. An analysis of the growth of SSL-enabled sites in Ireland reflects "a clear increase in non-Irish companies hosted in Ireland in the last 2 years, and this is mainly due to these companies using Amazon's EC2 service. Since October 2010 Amazon is the largest hoster of secure websites in Ireland."

The data illustrates how the growth of cloud computing is making it easier for companies to extend their reach beyond their shores, easily shifting Internet infrastructure into new regions by launching virtual machine instances on Amazon EC2.