Facebook's choice of North Carolina for a new data center highlights the company's focus on energy efficient facilities as the best path to reducing its carbon impact, rather than placing data centers near renewable energy sources, as Greenpeace has urged. 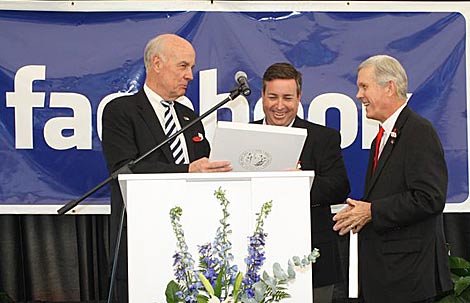 Facebook isn't going to let Greenpeace push its data centers around. That's the clear conclusion from Facebook's decision to locate its second company-built data center in North Carolina. The social network has been under relentless pressure from Greenpeace to build its data centers in areas where it can use renewable energy to power its servers.

Facebook's choice of North Carolina shows that the company continues to see energy efficient facilities as the best way to reduce its carbon impact, rather than placing data centers near renewable energy sources. In recent weeks, Facebook has published several case studies of energy efficiency projects that have reduced the carbon impact of the company's data centers.

Greenpeace International has critiqued Facebook’s decision to build its new data center in Prineville, Oregon, an area where the local utility uses coal to generate the majority of its power. The environmental group has mounted petition drives and protests using its own Facebook page, letters to Facebook CEO Mark Zuckerberg and even animated cartoons demanding that Facebook rethink its data center site location decisions. The dispute generated widespread news coverage and prompted 600,000 Facebook users to call on the company to "unfriend dirty coal."

Other Factors Driving Site Location
But Thursday's announcement makes it clear that Facebook isn't going to let Greenpeace tell it where to build its data centers - or at least, that the company's site location decisions continue to weigh other factors more heavily than renewable power.

The new Facebook site in Forest City is served by Duke Energy, which has an energy mix similar to that in Prineville. In 2009 Duke Energy generated 54.7 percent of its power from coal, 27 percent from nuclear power plants, 12 percent from wind and hydro-electric power, and 6.6 percent from natural gas, according to the company’s environmental disclosures. The utility expects its mix of renewables to improve further as it adds additional wind power generation.

'Making the Same Mistakes'
"Facebook has again chosen a location that will increase demand for dirty energy," said Greenpeace energy campaigner Gary Cook in a blog post. "Good corporate citizenship involves more than setting up a webpage dedicated to green issues, or becoming members of green clubs, just as energy efficiency is only the first step to managing your environmental footprint.

“While Mark Zuckerberg and Facebook seem more sensitive to their environmental reputation, they appear to be making the same mistakes in North Carolina as they did in Oregon," Cook added. "Facebook's rapid growth continues drive new demand for dirty energy, with no apparent plan for how to address the concerns of 600,000 Facebook users who want Facebook to get off of coal."

Cook said Facebook missed an opportunity to follow the lead of Yahoo, which has built hydro-powered data centers in Quincy, Washington and Lockport, N.Y. that rely primarily on hydro-electric power.

Facebook says the North Carolina facility with be an energy-efficient data center, and employ many of the techniques used to conserve power at its Prineville site. The Orgeon facility will use evaporative cooling instead of a chiller system, continuing a trend towards chiller-less data centers and water conservation. The North Carolina site is in a warmer climate, which will reduce the scope of free cooling. But the facility will likely mirror Prineville's practice of re-using excess heat expelled by servers to heat office space in the building, and foregoing traditional uninterruptible power supply (UPS) and power distribution units (PDUs) by adding a 12 volt battery to each server power supply.

Facebook has also been implementing energy efficiency measures at some of its leased data centers, reducing the volume of electricity used by these older facilities.

While it's not using hydro power, the new Facebook facility may have a lower carbon impact than other data centers reliant on an energy mix featuring coal. The new site in Forest City, N.C. is about 10 miles from Duke Energy's Cliffside Steam Station, which is readying Unit 6, a so-called "clean coal" facility fetauring lower emissions than traditional coal plants.